DAYTONA BEACH, Fla. – It was a natural question for a novice, and it’s how the first Rolex 24 Hours at Daytona media session began with reigning NASCAR champion Chase Elliott.

When was the last time you were called a rookie, Chase?

Elliott paused for a moment before a playful shrug.

“Last week at the Chili Bowl,” the Hendrick Motorsports driver said with a smile.

Going directly from the dirt to Daytona (and a completely unfamiliar take on the World of Center of Racing) has been that kind of dizzyingly fast-paced offseason of new race cars, courses and cultures for Elliott.

HOW TO WATCH THE ROLEX 24: Full broadcast schedule on NBC Sports

A VIEWER’S GUIDE FOR THE WEEKEND: Five things to watch in the 59th Rolex 24 at Daytona

Since winning the final two races of the 2020 Cup season to clinch his first title in NASCAR’s premier series (punctuated by an emotional victory Nov. 8 at Phoenix Raceway), Elliott has finished third in the Snowball Derby Super Late Model race and then switched to dirt events in North Carolina (a podium finish at Millbridge Speedway) and Tulsa, Oklahoma (the prestigious Chili Bowl).

And now he will make his debut in the Rolex 24 at Daytona debut, joining the No. 31 Action Express Racing Cadillac that will start on the pole position in one of the world’s biggest sports car endurance races.

“It’s been a lot of fun enjoying the racing,” Elliott told NBC Sports. “I haven’t really spent a winter racing like this since I got to Cup honestly, so it’s been really good to get back in the swing of that. I missed it.”

He had been longing so much that his moonlighting escapades were in the works long before he won the Cup title. Working for months to assemble the schedule, Elliott, 25, said he just needed to “take a lot of initiative to go out and make it happen.

“I’m really enjoying broadening my horizons and finding new challenges,” he said. “Don’t take it out of context, it’s not that I have NASCAR figured out, because I don’t. It’s more to do something different and find something new. I’m still fairly young and at an age I can learn new things. You get older, it’s harder to learn new stuff.”

There’s so much to learn with his high-tech DPi cockpit that Elliott has been afraid to tamper with the software settings on his space-age steering wheel, though he is getting more comfortable with the driver aids that improve handling. “Until I’m confident I’m getting 100% out of the car, I’m not sure what me turning knobs and pulling on levers is going to do,” he said. “Until then, I’ll keep trying to push the car and lean on these guys to see where I can get better. Try to simplify things, man. That’s the best way I can go about it. I’m not smart enough to do it any other way.”

The baby steps are OK with Elliott.

Just the chance to glean information and pick the brains of Nasr (a former Formula One veteran and IMSA DPi champion), Derani (a Rolex 24 and Twelve Hours of Sebring winner) and Conway (a winner and IndyCar and the World Endurance Championship) will improve his road-racing skills in Cup because “just one or two little things you can pick up doing something different, it adds up. When you’re in an environment as competitive as it is, finding those little small details are the things that make a difference nowadays.

“Fortunately the right opportunities came up with the right people and right cars and good cars and great people to work with,” he said. “You find new challenges, and it’s only going to make you better. Go somewhere and get humbled. You don’t want to get your feelings hurt, but you have to be open-minded enough to learn. Until you’re willing to take that step into an area you’re uncomfortable in, you’re not maximizing your potential.

“I’m fine being humbled as long as I’m making progress. I feel I’ve done that over the past week.”

Elliott, who got his pilot’s license during 2016 rookie season in Cup, said he learned the importance of diversifying skills from his Hall of Fame father, who had a passion for delving into airplanes and bulldozers on the side. Bill Elliott also had a sports car background, having won the GT class in the 1987 Rolex 24 (co-driving a Ford Mustang with Scott Pruett, Lyn St. James and Tom Gloy; he also finished fifth in the Twelve Hours of Sebring a year earlier with Ricky Rudd).

Elliott and his father since have discussed that victory (“He always seemed joyful about his experience,” Chase said) and when Chase watched Jeff Gordon win the 2017 Rolex 24 at Daytona, his interest became piqued in the IMSA WeatherTech SportsCar Championship season opener.

“It’s one of those races I’ve always respected and admired, and you always hear everybody talking about it,” Chase Elliott said. “It’s an event that I feel a lot of NASCAR guys have done over the years whenever they have the opportunity. So kind of growing up around NASCAR, you admire that, you see that. So those things made me realize that, ‘Hey, if I ever have a chance one day to go do this, I want to go do that, too.’

“I really started paying closer attention and heard a lot of Jeff’s comments going through the process. That intrigued me for sure. I just got more into it each year, and I watched the whole thing last year and got really into it.”

It was shortly after the 2020 Rolex 24 (when 2019 Cup champion Kyle Busch made his debut) that Elliott began inquiring if there’d be a 2021 opportunity.

Working with NASCAR chairman Jim France (who has an interest in the Action Express Racing team and has overseen the direction of IMSA), NASCAR team owner Rick Hendrick had begun brokering a deal over the summer to put Jimmie Johnson, Elliott’s Hendrick Motorsports teammate, in the No. 31 Cadillac.

But when sponsor Ally upped its commitment to field a second all-star car for Johnson (paired with Indy 500 winner and IndyCar champion Simon Pagenaud, two-time defending Rolex 24 winner Kamui Kobayashi and 24 Hours of Le Mans winner Mike Rockenfeller), a seat in the No. 31 suddenly was in play for Elliott.

Action Express team manager Gary Nelson told NBC Sports that the deal came together “maybe a month before Chase won the NASCAR championship. It was, ‘Maybe a fourth driver would be good in the 31, and Chase Elliott looks like he’s a good road racer.’ We started conversations going, and the next thing I know, he becomes a NASCAR champion, and instead of having a nice, easy offseason, Chase has been so busy.”

Nelson, a former championship Cup crew chief who was a long time director of NASCAR’s competition department, said Elliott’s jam-packed winter calendar made him an even more appealing option.

“I like drivers that race,” Nelson said. “Dirt, midgets or a Late model at the Snowball Derby, drivers that race to me are going to be sharper and on top of their game, so guys that drive on a regular basis and compete to win, that’s all they know. They want to win. I’m so excited that Chase did so much racing in the offseason.

“I believe Chase thinks that being diversified and dealing with situations on dirt tracks and midgets and road racing is going to make him a better driver stepping out of the 24 Hours going into his NASCAR car in Daytona. Being on dirt, you learn certain techniques of getting past your competition, and you learn that in road racing.

“I think all of that knowledge base makes him partially why he’s been so good in NASCAR road racing. He gains experience every time he’s running a lap on any kind of car on any kind of track. You still have a gas pedal, a steering wheel and brake pedal, and you’re supposed to go faster than the guy next to you who has all those same things. So it really becomes the driver’s talent and skill to pull out fractions of a second, and it’s typically with grip. You have to feel your tires through the seat of your pants.”

Though he has downplayed his credentials (“I’m definitely the low man just trying to learn and do my part”), Elliott enters Action Express with the bona fides of having won four consecutive road-course races in the Cup Series.

Johnson, who has only one road-course victory (Sonoma in 2010) during his illustrious career of seven championships, has been impressed watching Elliott in the Daytona garage the past week.

“He’s been able to make stuff happen that I can’t make happen,” said Johnson, who is using his eighth Rolex 24 start to help prepare for his transition to a part-time schedule in the NTT IndyCar Series. “Seeing him get out of the car, it’s very familiar the big, wide-eyed expression he has.

“I’m a few months ahead of him trying to get used to high-downforce cars, but our conversation is very much the same with the more experienced drivers, and been trying to help him with the small victories I’ve had so far and how to use the brakes and how to exploit lap time and downforce. He’s adapting quickly.”

The Dawsonville, Georgia, native also has gotten along swimmingly with his three teammates from different corners of the world. Brazilians Derani and Nasr have hailed Elliott’s “phenomenal” improvement acclimation to the team, even if Elliott laughs that he has yet to pick up any Portuguese.

Though he got a unique exposure Thursday while doing a track ridearound with Nasr to promote a new Cadillac model.

“Felipe said, ‘Hey man, why don’t you do my Instagram Live for me,’ ” Elliott said with a smile. “I pulled up his Instagram Live and recorded him driving around the track and out the window. And I see all these comments coming through, and I said, ‘Man, I don’t know what anybody is saying. I don’t speak your language.’ So it definitely has been a different experience but super cool.

So where in the world will his newfound racing journeys take Elliott next?

Supercars in Australia? Off-roading through the desert of the Dakar Rally? Not quite yet, it seems.

Elliott wants to give the Rolex 24 and the Chili Bowl another shot, but he isn’t ready to commit beyond that.

“I got my hands so full now, I better cool it,” he said with a laugh. “I’m having a lot of fun. I hope this isn’t my last shot (at the Rolex). This isn’t something you show up once and are at the best of your game. I’d love to continue winters like this if opportunities present themselves.” 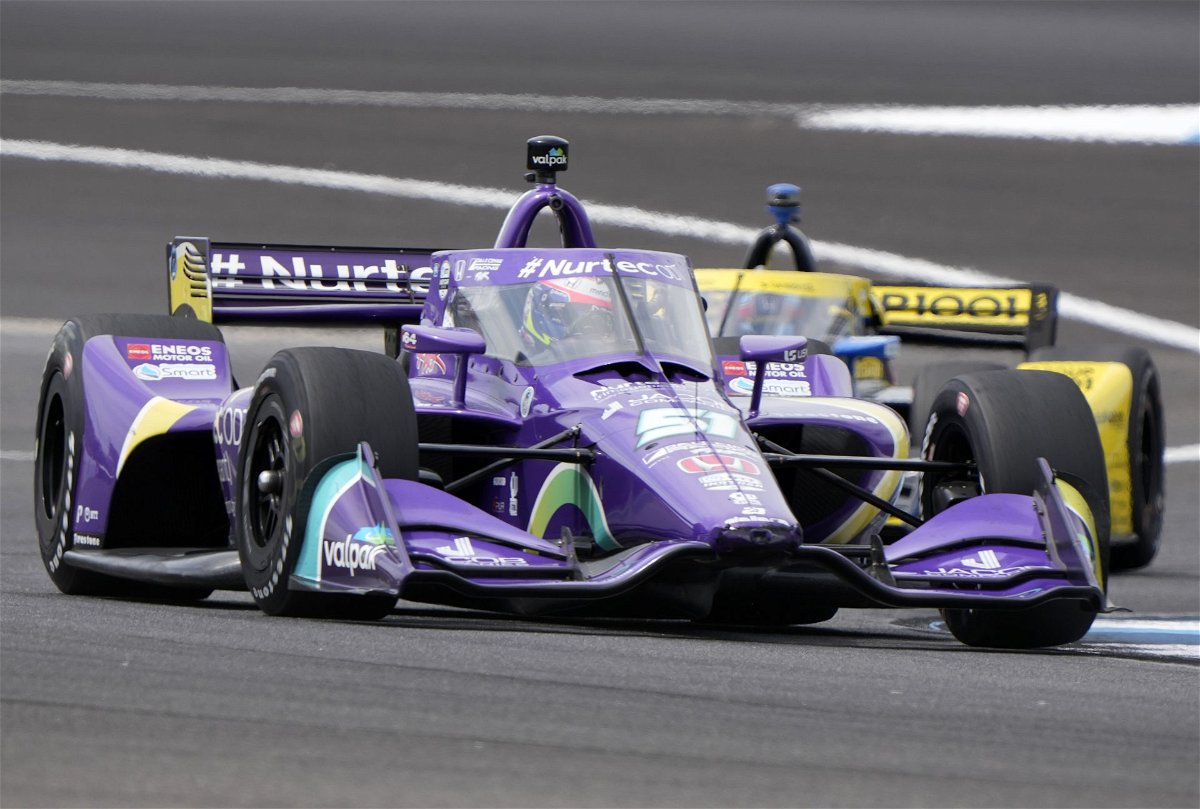 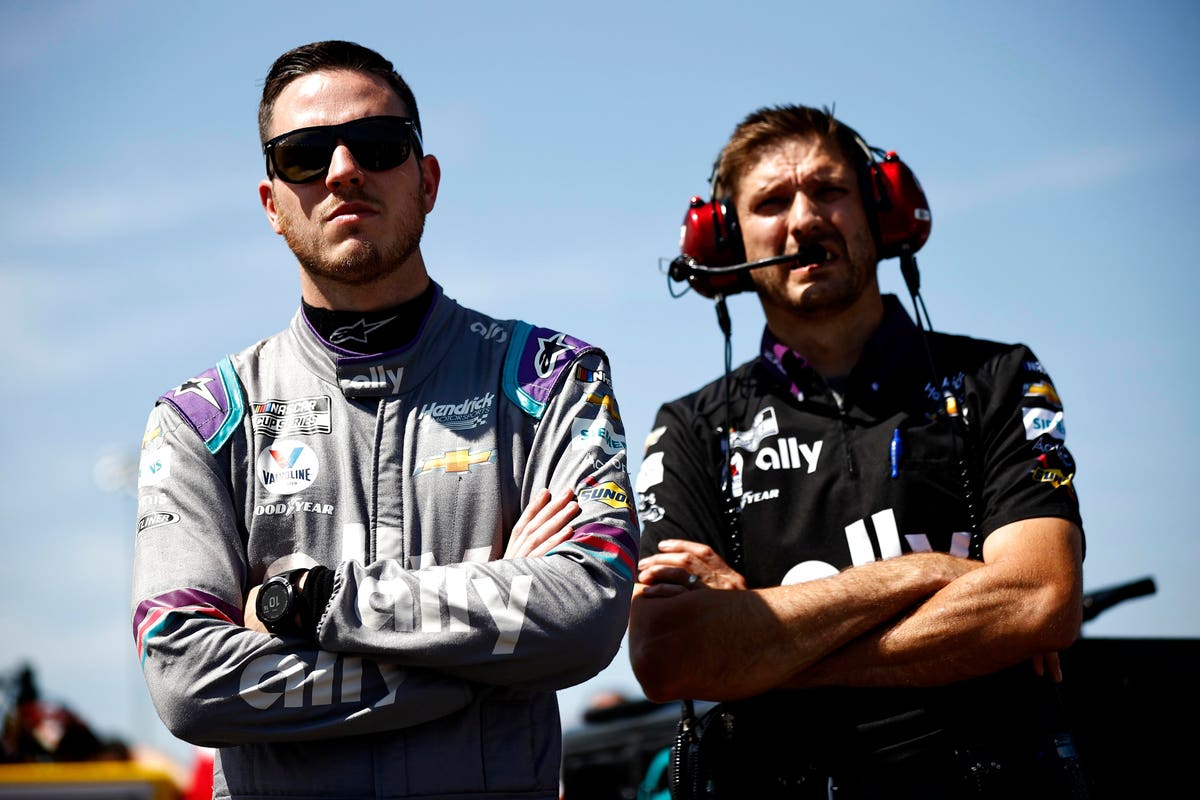 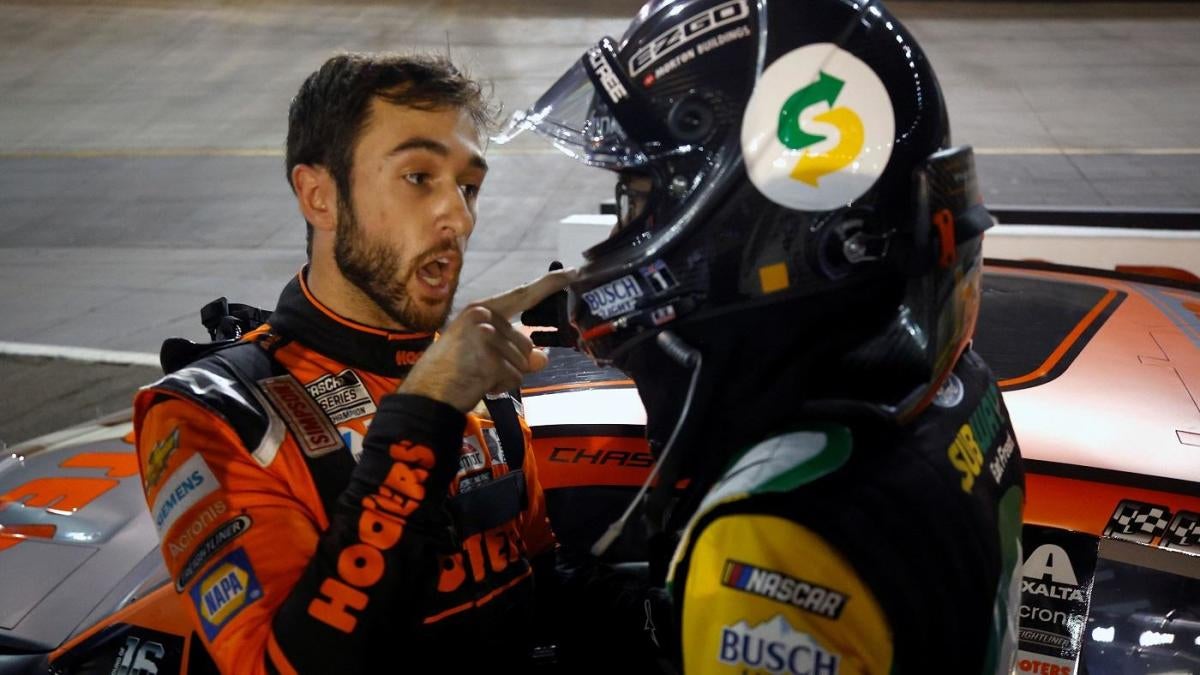 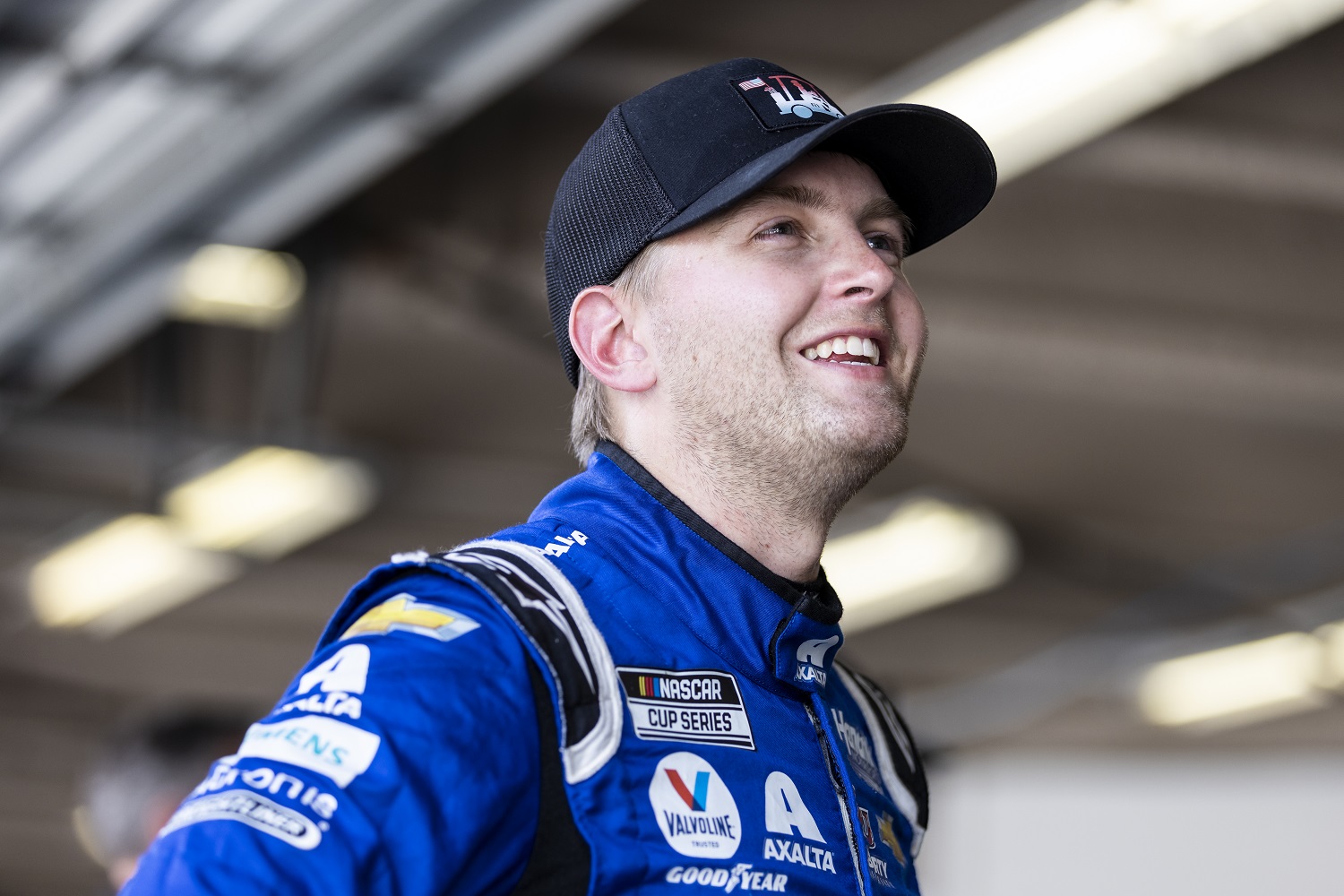 William Byron and His Hendrick Motorsports Teammates Can Breathe Again, for Now – Sportscasting