ASHBURN, Va. — The Washington Football Team settled its quarterback position — for now — but things remain unsettled when it comes to other big matters such as ownership of the team and a permanent name.

Some of those issues could be cleared up this week. Others will have to wait a while. And even though quarterback was stabilized this offseason, that doesn’t mean the search is over. Here is where Washington stands with some of the key decisions looming on and off the field.

What’s at stake for owner Dan Snyder at this week’s NFL meetings?

Complete ownership of the franchise.

During the virtual league meetings Tuesday and Wednesday, NFL owners will vote on Snyder’s attempt to buy out his three minority shareholders. It involves 40.5% of the stake in the franchise and would give his family complete control. Snyder owns 40.59% percent while his mother, Arlette, owns 6.5% and his sister, Michele, owns 12.55%. Snyder would pay $875 million and already has received a $450 million debt waiver from the NFL’s finance committee, which clears the way for approval.

At least three-quarters — 24 of the 32 owners — need to vote in favor of the sale for it to be completed.

It also would end a nearly yearlong squabble, filled with court filings and accusations, between Snyder and his three longtime minority shareholders, Fred Smith, Dwight Schar and Robert Rothman. They each purchased shares in 2003.

The NFL has said this situation is separate from the ongoing independent investigation led by attorney Beth Wilkinson into Snyder’s organization, stemming from charges of sexual harassment by past employees. The NFL has not yet received the report, according to a spokesman. Last month, twenty former team employees asked NFL commissioner Roger Goodell to make the report public when it’s completed.

It’s uncertain whether approval of the sale signals what future punishment Snyder might face based on the findings. Multiple league sources have said since the investigation started that they don’t expect the other owners to force Snyder to sell. Most have said other owners, even if they disliked him, would not want to do so for fear of setting precedent — and wondering how it could be used to force out others in the future. But these same sources said everything depends on what else is in the investigation.

The team reached a $1.6 million settlement over a sexual misconduct claim vs. Snyder in 2009, but Snyder has denied any wrongdoing and an outside law firm failed to substantiate the charges.

Where is the team at with a new name?

Washington president Jason Wright has been consistent in saying the process would take a while, but he did tell ESPN last week that the new name would be in place for 2022. For the 2021 season it will remain the Washington Football Team, and while that name will receive consideration as a permanent one, there is no name that is in the lead at this point.

Stephen A. Smith and Max Kellerman rip the Washington Football Team for considering keeping its name.

Wright also has said that once they have a name, they won’t announce it until they have completed other aspects of their re-branding, such as designing and approving a new logo. Wright said a new name could be announced during the season, but, “it’s hard to commit to timing because the importance here is thoroughness, rigor and ensuring that we have been inclusive of all the folks that we need to listen to. That works against speed in some ways, but we’re moving as fast as possible.”

Washington announced last July that it would retire its former name, but the search did not begin in earnest until after Wright arrived in August.

They have received more than 15,000 submissions, and Wright said they won’t simply take the name with the most votes but, rather, discuss the reasons why names are popular: Is there a theme that resonates?

Even if the final choice isn’t Washington Football Team, Wright said the sentiment behind why some like it could help in choosing another name.

“It’s important for a substantial part of our fan base to feel that this is a continuation of something versus a complete reset, something brand new,” he said.

After signing Ryan Fitzpatrick, is Washington done at QB?

No. From the time they signed the veteran journeyman, it was clear the team would continue seeking a long-term solution at quarterback. In fact, signing Fitzpatrick probably increased the likelihood of drafting a quarterback.

The coaches view Fitzpatrick as a strong mentor, making him a desirable pairing with a rookie. Sources have been consistent in saying they could draft one and, yes, it could happen in the first round (WFT has the No. 19 pick). But it also could be a Day 2 pick — someone such as Florida’s Kyle Trask. It’s not a guarantee they will draft one, but it does remain a strong desire.

Washington has Kyle Allen and Taylor Heinicke on the roster, so if it adds a QB, it would eventually lead to one of them being cut. Allen has no guaranteed money this season and would cost nothing to cut; Heinicke has $1.5 million in guaranteed money.

If Washington doesn’t draft a quarterback, it could roll with what it has and try again next year; it could also re-sign Fitzpatrick to once more serve as a mentor. But it wants to add another young quarterback, with a higher ceiling, to develop.

What you need to know about the Washington Football Team:

Not necessarily. Washington signed Curtis Samuel, whose speed was desired, and veteran slot receiver Adam Humphries. While Samuel will be used in the slot, Washington wants to move him around and take advantage of his versatility. The staff envisions also using him outside, perhaps paired with Terry McLaurin to provide defenses a different look, or in the backfield, whether as an occasional runner or as a mismatch in the pass game.

Humphries’ presence allows them to move Samuel around. But Washington also wants to strengthen its outside receiving corps — especially seeking big targets. That’s why, according to a source, they will continue to monitor New England’s 2019 first-round pick N’Keal Harry (6-foot-4, 225 pounds) if the Patriots decide to trade him.

They have other areas to address on offense — left tackle and another tight end among them — that could be done during the draft. The big-body targets they have at wide receiver include Cam Sims, who is coming off a strong finish to 2020, last year’s fourth-round pick Antonio Gandy-Golden, a non-factor as a rookie in part because of injuries, and 2019 fifth-rounder Kelvin Harmon, who missed last season with a torn ACL.

It’s possible one or two of those targets emerge, but if Washington gets the right opportunity to add competition for them, it will.

Even with Marquise Brown, Arizona Cardinals a different team without DeAndre Hopkins

Where the Packers stand with Aaron Rodgers back, Davante Adams gone and draft upcoming

Even with Marquise Brown, Arizona Cardinals a different team without DeAndre Hopkins

Where the Packers stand with Aaron Rodgers back, Davante Adams gone and draft upcoming

Kings take on the Spurs, aim for 6th straight victory 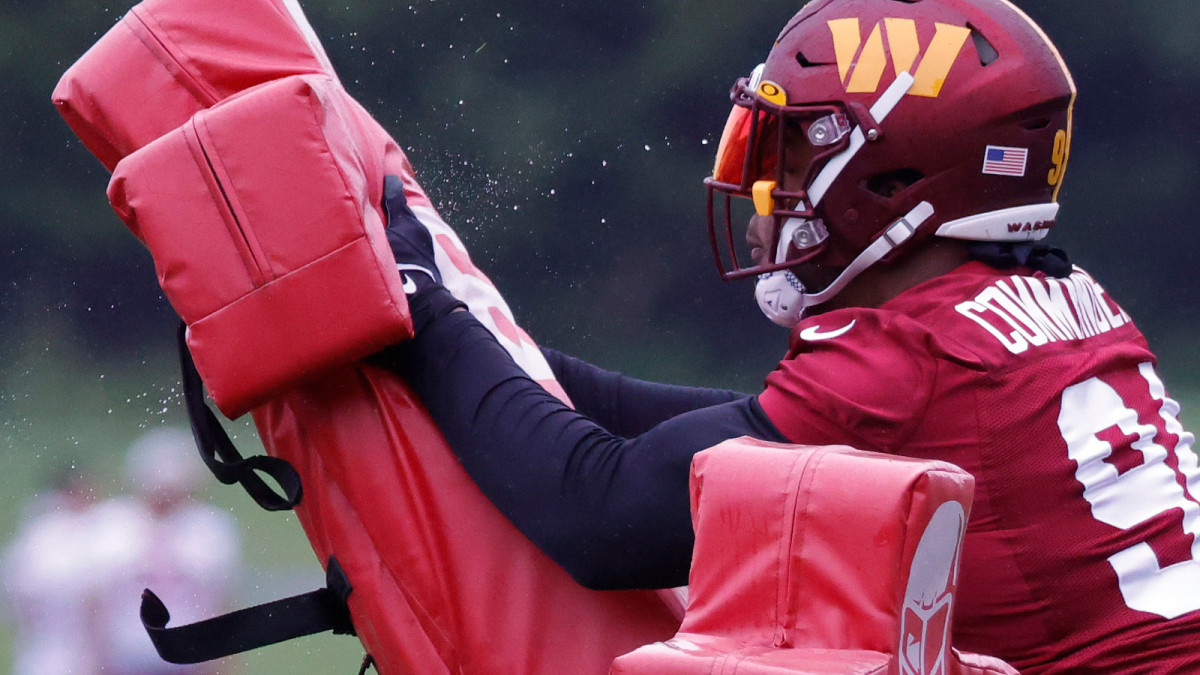