Verstappen and Hamilton clashed at the race’s opening corners, with the latter then having to put in a recovery drive after sliding off into the gravel at the Tosa hairpin just before the red flag shortly before half distance thanks to the massive accident involving his Mercedes team-mate.

Rain falling in the first half of the Imola lap in the hour ahead of the race start meant most of the cars left the grid on intermediate tyres.

From third at the start, Verstappen made a perfect getaway to pull alongside Sergio Perez when the lights went out, and was quickly able to challenge polesitter Hamilton – nearly running onto the grass on his left-hand side – as they shot down to the Tamburello chicane.

Verstappen was ahead by the braking zone but Hamilton braked later to stay on the outside and the pair went side-by-side around the first left part of the sequence.

The Red Bull held the racing line and, when Hamilton determinedly kept his nose alongside, they clashed at the chicane’s second apex, damaging the Mercedes’ left-front wing endplate and forcing Hamilton to clatter over the kerbs.

Verstappen roared clear in the lead as the pack behind continued to tentatively make their way around the opening tour, which ended with the safety car being deployed after Nicholas Latifi speared into the wall exiting Acque Minerali, where he had just spun off, and pulled across the front of Nikita Mazepin’s Haas.

The race was paused until the start of lap seven of 63, an extended period as a result of Mick Schumacher losing the rear of his Haas warming his tyres in the safety car queue and knocking his front wing off on the wall near the pit exit, which was closed as the debris was cleared.

Verstappen was able stay ahead of Hamilton as the Briton looked to the outside on the run to Tamburello as they got back up to racing speed, with Charles Leclerc, who had passed Perez for third exiting the Variante Alta seconds before Latifi’s crash, also following closely in third.

But a slide exiting Acque Minerali from Hamilton gave Verstappen breathing room and he had a 3.3-second lead at the end of the first racing lap.

Verstappen quickly set about extending his advantage to the five-second mark, with Leclerc soon disappearing from Hamilton’s rear, but well clear of Perez, who was handed a 10s-time addition for overtaking under the safety car as he had slide wide at Piratella and briefly let Daniel Ricciardo and the full-wet shod Pierre Gasly get by.

Hamilton was able to keep Verstappen’s lead at around five seconds for the next phase of the race as they exchanged fastest laps while considering when to come in and change their inters to slick tyres.

Just after Verstappen had edged his advantage up to 6s approaching half distance, Hamilton was suddenly able to gain significantly, cutting the gap in half over two laps before they reached traffic at the rear of the pack.

Once they had cleared the cars in front, Verstappen’s lead was down to two seconds and, after a radio exchange with his team, he pitted for slicks at the end of lap 27.

Hamilton also came in for mediums at the end of the following lap, but the decision to stay out for a tour and the right front coming slowly off the Mercedes meant Verstappen’s lead was back up to 5.5s at the start of lap 31.

On that tour, which had started with Verstappen lapping Valtteri Bottas, running near the end of the top 10 in the second Mercedes and at the head of another pack of lapped traffic, Hamilton locked up lapping Russell at Tosa and slid into the gravel.

He went far enough to damage his front wing against the outside wall when he attempted to turn onto the escape road, which forced him to stop and slowly engage reverse and eventually go backwards out the long way onto the track.

Hamilton toured back to the pits, promoting Leclerc to second and Norris to third after Perez had dropped behind the McLaren during his penalty-addled pitstop, to change his front wing but was able to make his second stop under the safety car after Bottas and Russell’s massive accident at Tamburello. 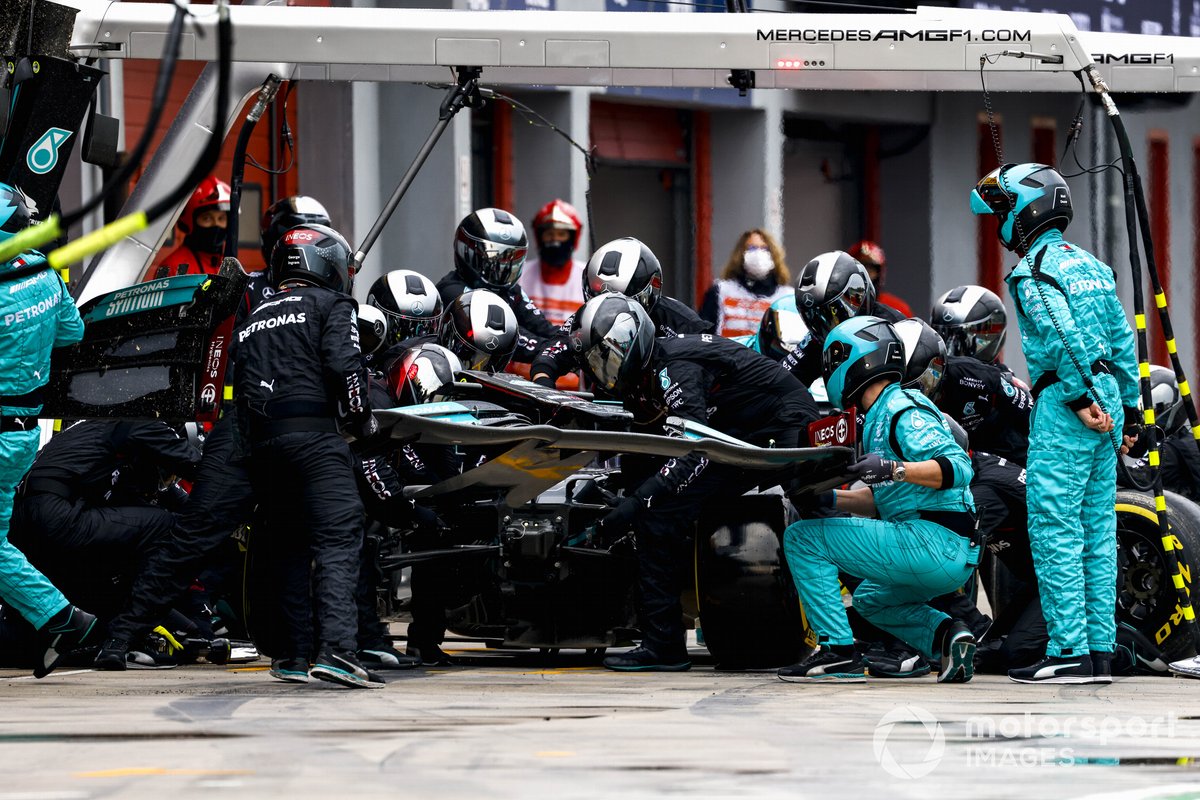 The Williams driver had been closing in very fast on the outside of the Mercedes approaching the chicane’s left apex and, just before they reached the braking zone, they ran very close together.

Russell appeared to put his right-rear wheel on the grass, possibly in reaction to Bottas jinking right – the incident is to be investigated after the race – and the Briton’s car shot left and the pair were both eliminated in a huge crash into the barriers on the inside and then outside of Tamburello, where they remonstrated with each other in the gravel after coming to a stop.

The race was red flagged for 25 minutes before it was resumed at the start of lap 35, but with a rolling safety car restart instead of a second grid start – which was used at Monza and Mugello in 2020.

Verstappen dropped Leclerc when he reached the line, seconds after the Red Bull had nearly spun the lead away when he had to catch a big moment and cut across the inside of the first Rivazza turn as the safety car peeled off ahead.

The lack of tow behind Verstappen left Leclerc vulnerable to Norris and the McLaren driver – running the softs compared to the mediums on the Ferrari and Red Bull – duly claimed second at Tamburello.

Verstappen scampered clear at the front, reaching a six-second advantage by the start of lap 43, with Norris attempting to keep his softer tyres alive to the finish ahead of Leclerc and Carlos Sainz Jr, who had been promoted by Perez spinning off behind the lead Ferrari as he ran through the Villeneuve chicane on lap 38 and dropping to P14.

In the pack behind, Hamilton was attempting a recovery drive after gaining back the lap he’d lost with his Tosa off and slow lap back to the pits thanks to the red flag.

He took the restart in ninth, immediately gaining a spot when Yuki Tsunoda spun off in front of the Mercedes at Tamburello on the first lap back to racing speed, and then picking off Lance Stroll and Ricciardo in quick succession once he’d fired up his mediums and benefitted from the DRS power into Tamburello.

Hamilton took a while to close in on the Ferraris ahead but eventually passed Sainz to set up a tense chase into the closing stages, with Norris trying to hold off Leclerc as Hamilton came up behind them. 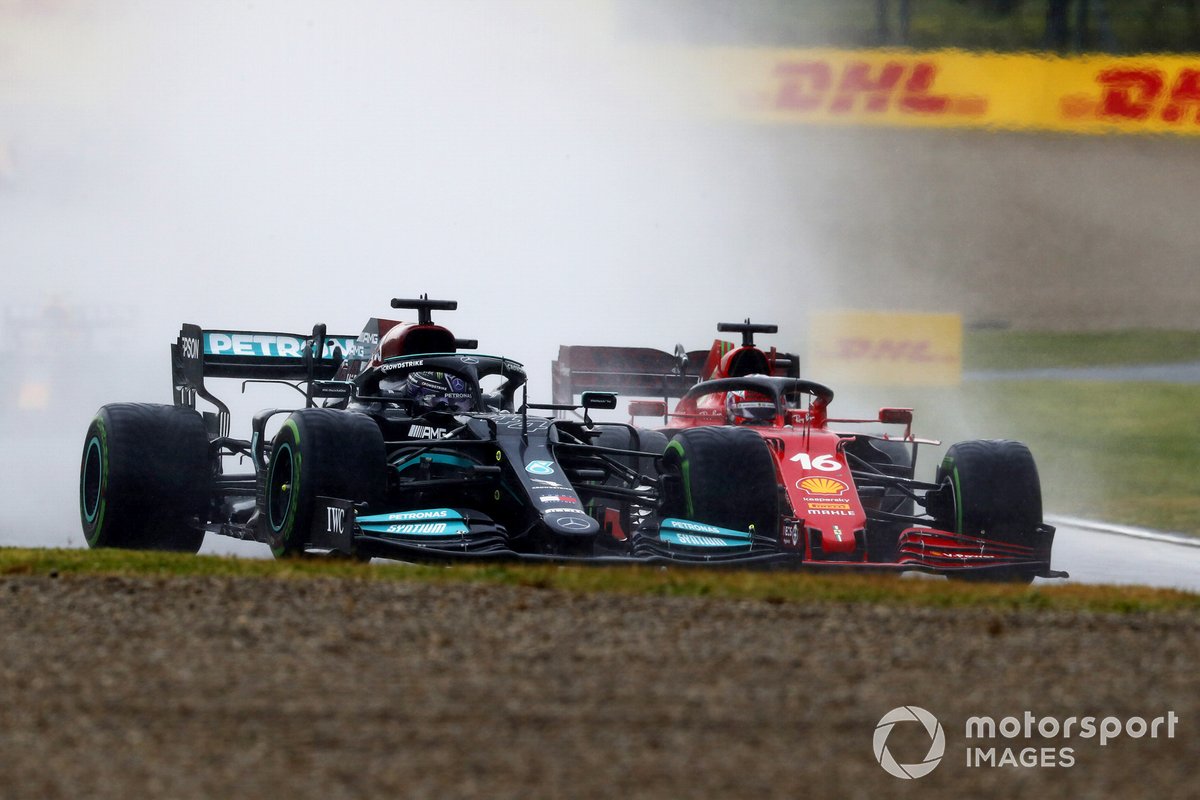 When Leclerc dropped back and lost DRS behind Norris at the start of lap 55, Hamilton didn’t hesitate and took third blasting along the outside ahead of the Tamburello braking zone and set off after the McLaren.

Norris held on for a further five laps but, in the end, Hamilton was able to make a near-identical move with DRS at the start of lap 60 to retake the second place he had lost nearly half the race earlier.

Verstappen was already 20s up the road and the two leaders exchanged fastest laps in the final few tours, which eventually went to Hamilton, as Verstappen won by 22s, with Norris coming home 1.7s behind the Mercedes.

Leclerc and Sainz, who had had several offs during the wet opening stages, took fourth and fifth, ahead of Ricciardo and Stroll – the Aston Martin driver claiming points after his car was hurriedly repaired when its brakes caught fire on the laps to the grid as the rain initially fell.

Gasly ended up eighth having been a rolling roadblock on his full wets early on, with Kimi Raikkonen ninth but facing a post-race investigation for a possible rolling start restart infraction.

Esteban Ocon took the final point in 10th ahead of his Alpine team-mate Fernando Alonso, who had knocked his front wing off sliding off at Tosa on the pre-race laps ahead of the start and later had a spin in the aftermath of the Bottas/Russell shunt.

Perez ended up 12th ahead of Tsunoda, while Sebastian Vettel was a late retirement with a suspected gearbox issue.