Max Verstappen has eased to victory at the end of an action-packed Formula 1 Emilia Romagna Grand Prix.

The Red Bull driver’s final margin of victory, more than 20-seconds, belied a race that saw second-placed Lewis Hamilton a lap down and in the wall just after half-distance.

Conditions were difficult pre-race, the track having been doused with rain.

That saw Fernando Alonso nose into the wall at Tosa on the lap to the grid pre-race, while Charles Leclerc lost control at Acque Minerali on the formation lap.

The Ferrari driver was able to recover and rejoin the train, taking up his prescribed starting position despite finding the gravel.

That followed braking issues for both cars pre-race; Lance Stroll’s rear brakes catching fire but was told to carry on through the pits to extinguish the flame.

When the race got underway, Max Verstappen seized the lead at Tamburello after going wheel-to-wheel with Hamilton into the chicane, emerging the better of the two.

Run out of road, the Mercedes driver bounced over the kerb inside Turn 2, the W12 taking damage to the front wing endplate in the process.

A spin at Acque Minerali for Nicholas Latifi was quickly followed by another incident, the Williams driver firing into the wall following contact with Nikita Mazepin.

The pair touched when Latifi moved over to the racing line as he recovered from his spin, a piece of track occupied by the Haas, drawing the Safety Car before the end of the opening lap.

Having started on the full wet tyres, Esteban Ocon pitted at the end of Lap 1 to switch to intermediate tyres.

Sergio Perez fell to fourth on the opening lap; a slow start dropping him to third before a wobble exiting Variante Alta allowed Leclerc to scamper beyond the Red Bull.

Under the Safety Car, Mick Schumacher hit the wall at pit exit.

The German had started on the full wet tyres, losing control as he warmed them down the pit straight.

It forced officials to close the pit entry to allow the retrieval of the Haas’ front wing, Schumacher having to continue circulating with a damaged nose until the lane was reopened.

Perez was another who skated off, skipping through the gravel at Piratella.

It saw him drop behind Daniel Ricciardo and Pierre Gasly, though the Red Bull driver recovered his position.

It was a costly error after he was slapped with a 10 second time penalty for overtaking behind the Safety Car.

Schumacher pitted at the end of Lap 6, just after Race Control confirmed the Safety Car would be withdrawn.

Verstappen led the field away, Hamilton tucked into his slipstream but forced to the outside of the circuit by the race leader who held his spot through Tamburello.

Behind, a scrap developed between Pierre Gasly, Lando Norris, Carlos Sainz, Lance Stroll, and Valtteri Bottas – Norris gaining two places in the run from Rivazza to Tamburello as they began Lap 9 to move up to seventh.

A lap later, he took sixth off Gasly, using the straight-line speed advantage of his McLaren to ease by on the run to Tamburello.

Out front, Verstappen extended a five second advantage over Hamilton, who’d cemented himself in second ahead of Leclerc and Perez.

The race quickly broke apart with large gaps throughout the field, except for a train following the wet-shod Gasly in ninth, and the two McLarens which ran line astern.

Gasly’s AlphaTauri soon began to drop like a stone, his best lap some eight seconds off the pace of Verstappen out front.

With conditions having dried the Frenchman was stuck in a strategic limbo; needing to stop but unable to switch straight over to slick tyres to mitigate his losses.

On Lap 13 he dropped from 10th to 14th, the team finally admitting defeat after 15 laps and stopping for intermediate rubber.

The gap out front had stabalised; Verstappen holding a 4.5 second advantage to Hamilton and more than 18 to Leclerc in third.

McLaren moved Ricciardo aside on Lap 18 to give Norris clear air, the Brit having complained that he was being held up by his team-mate.

It was a pragmatic move as Norris quickly opened a 5.6 second advantage, his team advising him it did not wish to be among the first to switch to dry rubber tyres – essentially instructing the Brit not to burn up his tyres too quickly.

Vettel was the first to make the switch to slicks, pitting after 20 laps for a set of medium tyres.

He’d been running 14th at the time and dropped two spots in the process, making the change a low-risk affair.

Soon after he emerged from the lane, he was handed a 10 second stop-go penalty for his car not having its wheels fitted with five minutes to go pre-race.

That was due to the aforementioned brake issue the team was working to resolve, eventually pushing the AMR21 off the grid and into the lane.

His pace on slicks suggested it was too early for the switch, dropping time before returning to the pits to serve his penalty at the end of Lap 23.

Verstappen’s advantage at the front of the race had been eroded as he worked through traffic, Hamilton cutting what had been a five-second advantage to less than three.

The gap see-sawed quickly from three seconds to two and back out again, while Leclerc also closed in to sit an awkward 15.4 seconds off Verstappen.

Sainz put a move on Ricciardo at Tamburello as the pair started Lap 27, the Ferrari powering by to claim sixth place.

Lap 27 proved the cross over point; Vettel’s sector times on par with those on intermediates.

Hamilton was told he had one lap to overcut his Dutch rival, a gap that sat at two seconds prior to the pit sequence beginning.

Setting the fastest first sector of the race, Hamilton had a slow stop and ultimately lost ground; the gap between he and Verstappen 3.5 seconds after the Brit emerged from the lane.

Almost as one stopped, the field stopped, leaving the order Verstappen from Hamilton, Leclerc, Norris, Perez (having served his penalty), Sainz, Ricciardo, Bottas, Stroll, and Russell in the points-paying positions after 29 of the 63 laps.

Working through traffic, Hamilton left the road on Lap 31 at Tosa.

It saw him nose into the barrier, his steering lock insufficient to allow his clean exit from the gravel trap.

He reversed the car back into the racing surface, though carrying a damaged front wing. 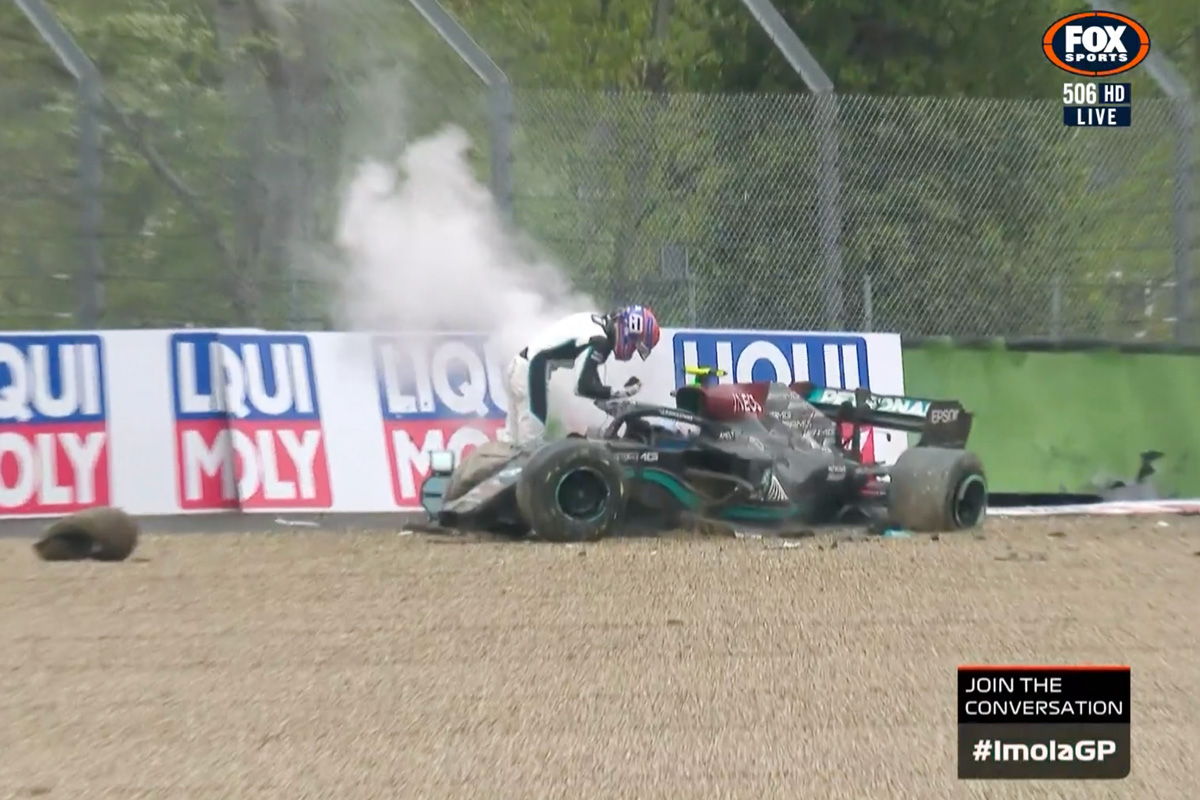 Soon after, Bottas and George Russell both crashed out, immediately drawing a Safety Car.

The Williams driver was visibly displeased, confronting Bottas before the Mercedes driver had even climbed from the car.

Russell had been looking to put a move on Bottas, appearing to drop a wheel on the wet grass and spearing into the Finn on approach to Tamburello.

With debris strewn across the road, the race was promptly red flagged.

Under the red flag, teams were able to work to repair damage, Red Bull looking at the front wing on Perez’s car.

The lapped runners were released just prior to the restart, completing a lap before returning to the pits to rejoin the queue having regained a lap.

Officials declared a rolling restart, despite the option for a standing start being available.

Looking to warm up his tyres as the Safety Car pulled into the pits, Verstappen slewed off the track at Rivazza.

He was able to hold onto the lead and led the field to the restart, at which Norris, on a set of soft tyres, immediately passed Leclerc for second.

In the pack, Tsunoda slid off the road at Tamburello, dropping the AlphaTauri all on his own.

He was able to rejoin the race, tumbling down to 15th in the order.

It was good news for Hamilton, as he gained a place as a result to climb to eighth.

On Lap 38, Perez fell off the road at Variante Villeneuve, dropping from fourth to 14th after running on to a damp patch.

Hamilton inherited a position as a result, claiming sixth from Stroll at the start of the next lap on approach to Tamburello.

The seven-time champ quickly reeled in Ricciardo in fifth, driving around the outside of the McLaren under braking at the same corner at which he’d despatched Stroll.

His march forward then somewhat stagnated, unable to close on Sainz with anything like the pace with which he had caught Ricciardo.

It took until Lap 49 before he was in a position to launch an attack, Sainz fending off his first advances into Tamburello.

Next time through he made the move stick, completing the pass well before the apex of the left-hander.

A three-way scrap then developed for second place; Norris narrowly ahead of Leclerc who in turn had Hamilton for company.

The trio ran within DRS range of one another, making Hamilton’s progress more difficult.

Having dropped more than a second behind Norris, Leclerc was then powerless to defend from Hamilton when they raced down into the first chicane on Lap 55.

The world championship leader’s rise was completed by passing Norris for second on Lap 60.

It followed several failed attempts from Hamilton, DRS allowing the Mercedes driver to close up on the approach to Tamburello but not enough to complete the move.

A better run out of Rivazza though saw him closer, stealing the place just as they entered the braking zone for the chicane.

With two laps remaining, Verstappen had extended a more than 20-second advantage over his championship rival.

He duly took a comfortable win, his first of the season, over Hamilton, with Norris, Leclerc, Sainz, Ricciardo, Stroll, Gasly, Kimi Raikkonen, and Ocon rounding out the top 10.

With Hamilton picking up the point for fastest lap, he continues to lead the championship, now by a single point over Verstappen.

Seven points separate Mercedes from Red Bull in the constructors’ championship, Perez having finished outside the points in 12th.

Norris and McLaren sit third in their respective championships, the British squad seven points clear of Ferrari in fourth.

Cage Fighting Is 'Most Terrifying Thing In The World'