The College Football Playoff once again featured made-for-TV matchups with heavyweight programs… and it once again delivered a series of games which weren’t particularly close and didn’t capture the public’s imagination.

The previous low for total viewership in a BCS or playoff championship game was the 2005 Orange Bowl, when USC’s second-quarter blitzkrieg against Oklahoma caused Americans to turn off their sets before halftime. A total of 21.4 million viewers tuned into that game.

As a point of comparison, last year’s championship game between Clemson and LSU drew 25.6 million viewers. That puts Ohio State-Alabama roughly seven million viewers below Clemson-LSU. Given Ohio State’s national brand, and given the reality that Ohio State’s presence made this year’s championship game an intersectional clash with representation from multiple regions, that’s an eye-opener. It wasn’t an all-South affair. That ostensibly should have boosted the ratings for this game.

Many are saying the dominance of college football by a small and select — and unchanging — group of teams is killing interest in the sport. I personally have my own very specific views on the matter of how we improve college football’s postseason, but if we are going to consider ways of enhancing the College Football Playoff — and not trying other structures or plans — I have ideas on that subject as well.

Let’s look at five ways of enhancing the College Football Playoff, whose contract goes through the 2025 season.

This is the move which makes the most sense for anyone who wants to keep the College Football Playoff — instead of moving to a different system — but reform the playoff to make it better.

Give the Cincinnatis and UCFs of the world a chance to play a quarterfinal game. Give them their place at the table. It’s a source of great annoyance and frustration that the same six or seven schools are in the playoff on a regular basis.

Check out these facts: There have been seven College Football Playoffs, meaning that 21 playoff games have been played (three games each season, two semifinals and one title game). Of those 21 games, 17 have been won by just three schools, 14 by only two.

Keep in mind, too, that if Alabama and Clemson had been placed in opposite halves of the 2017 College Football Playoff, instead of meeting in the semifinals that season, Georgia might not have won its game, and 15 of 21 playoff games could have been won by just two teams.

Give the Group of Five champion a place at the table. Freshen up the matchups. Extend the reach of the playoff geographically and culturally. Move to eight. 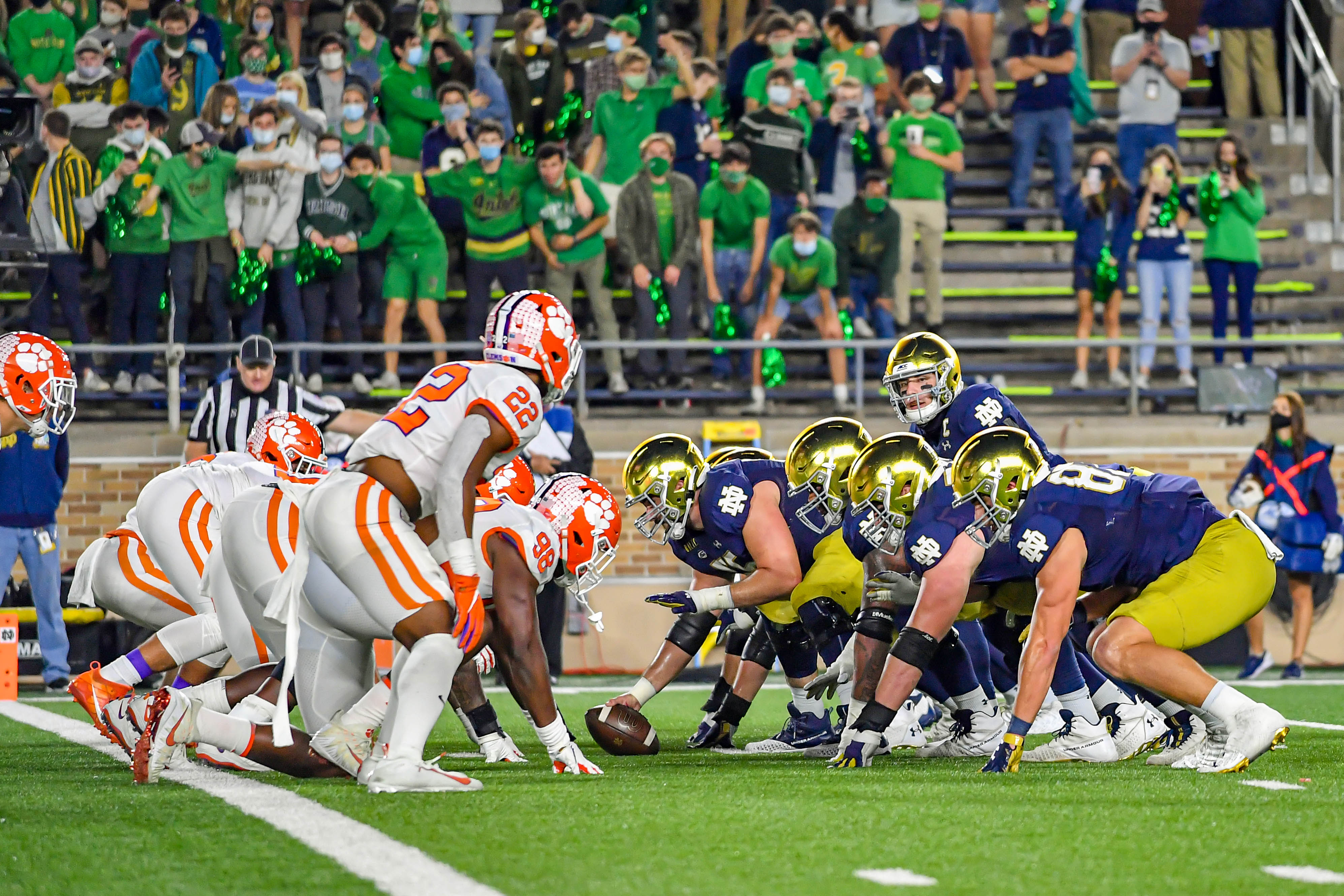 If we are going to ask the top four seeds to play an extra playoff game in order to win the national title, we can at least give them a home game in the quarterfinals. The Group of Five champion gets its spot in a playoff quarterfinal, but the price for that precious postseason bid is a road game against a brand-name team. It’s a reasonable tradeoff.

Having a campus atmosphere for a playoff game would enliven the event and make it less corporate. If we want to make the College Football Playoff better, this seems like another widely popular thing to do.

3. SEMIFINALS ON NEW YEAR’S DAY OR SATURDAY, NOT OTHER DAYS 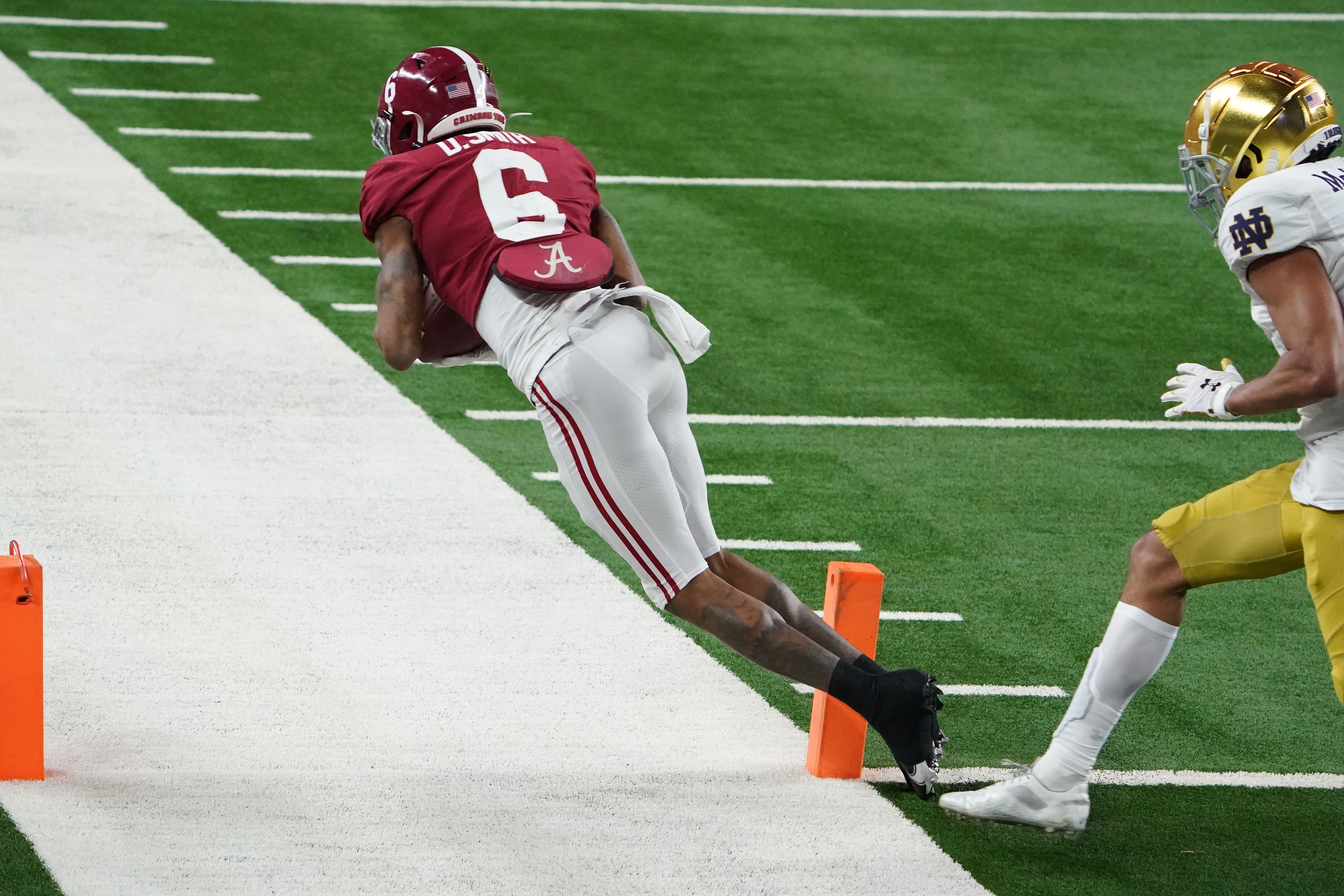 The 2021 college football season is scheduled to have its playoff semifinals on Friday, December 31, 2021.

This is so unnecessary. 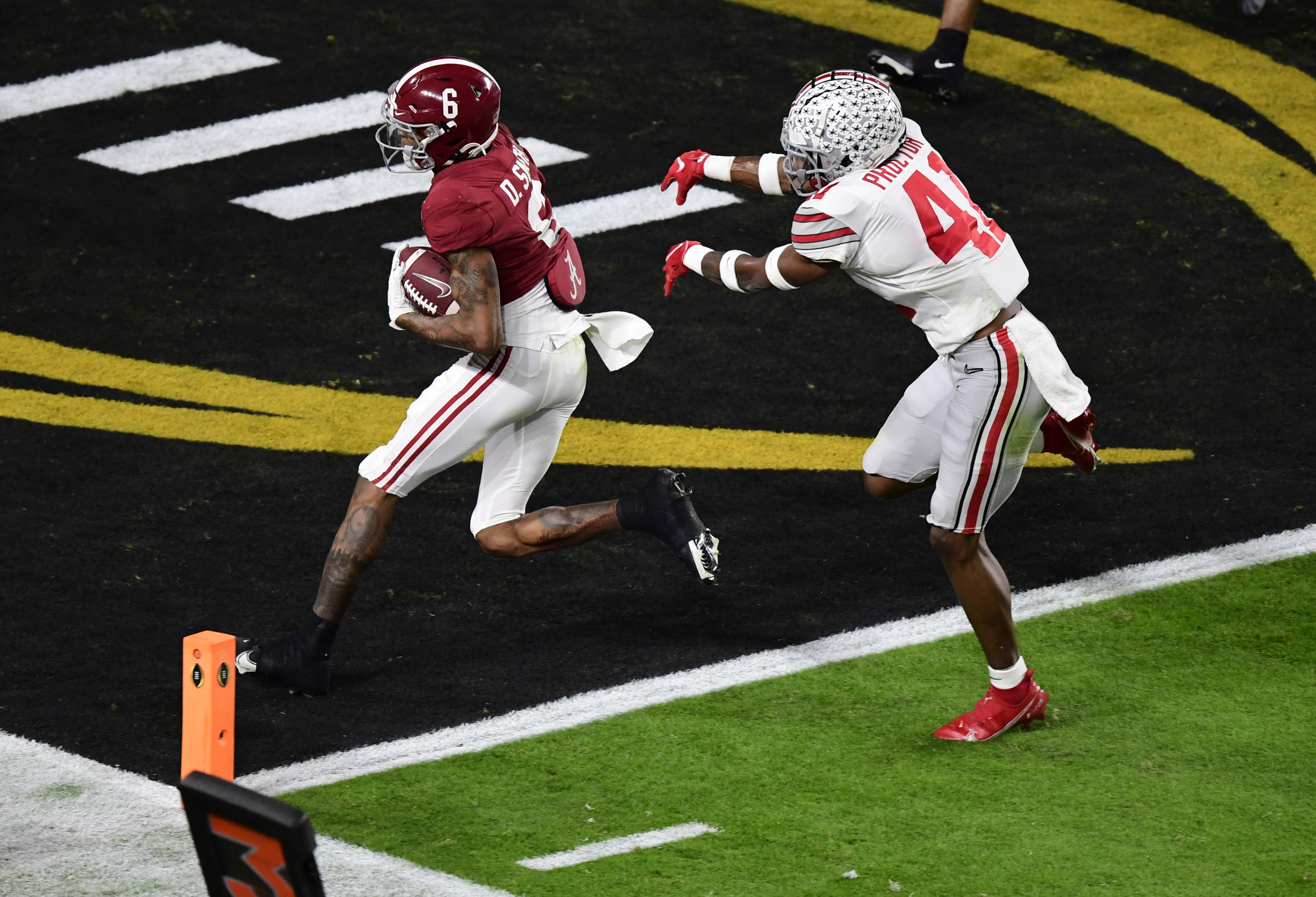 The Alabama-Ohio State championship game kicked off close to 8:15 p.m. in Miami, which meant that young kids who had to go to school the next day had almost no chance to stay up and watch. Parents in the East and Midwest had to go to bed before the game ended as well.

Again: Why make this so hard for everyone? Play the title game on a Friday night before the NFL playoffs — and not AFTER a weekend of NFL football, when a lot of people are “footballed out.”

Keep in mind that with the NFL going to a triple-wild-card weekend — three games, not two, on Saturday and Sunday — the NFL occupied even MORE of the media focus in American sports. College football needs to get ahead of the NFL, instead of waiting for the NFL weekend to unfold. That builds more publicity for the title game, and it also enables kids and parents to stay up late. They can sleep in on Saturday morning. The NFL doesn’t start until 1 p.m. on wild card weekend, not until 4:35 on divisional playoff weekend. 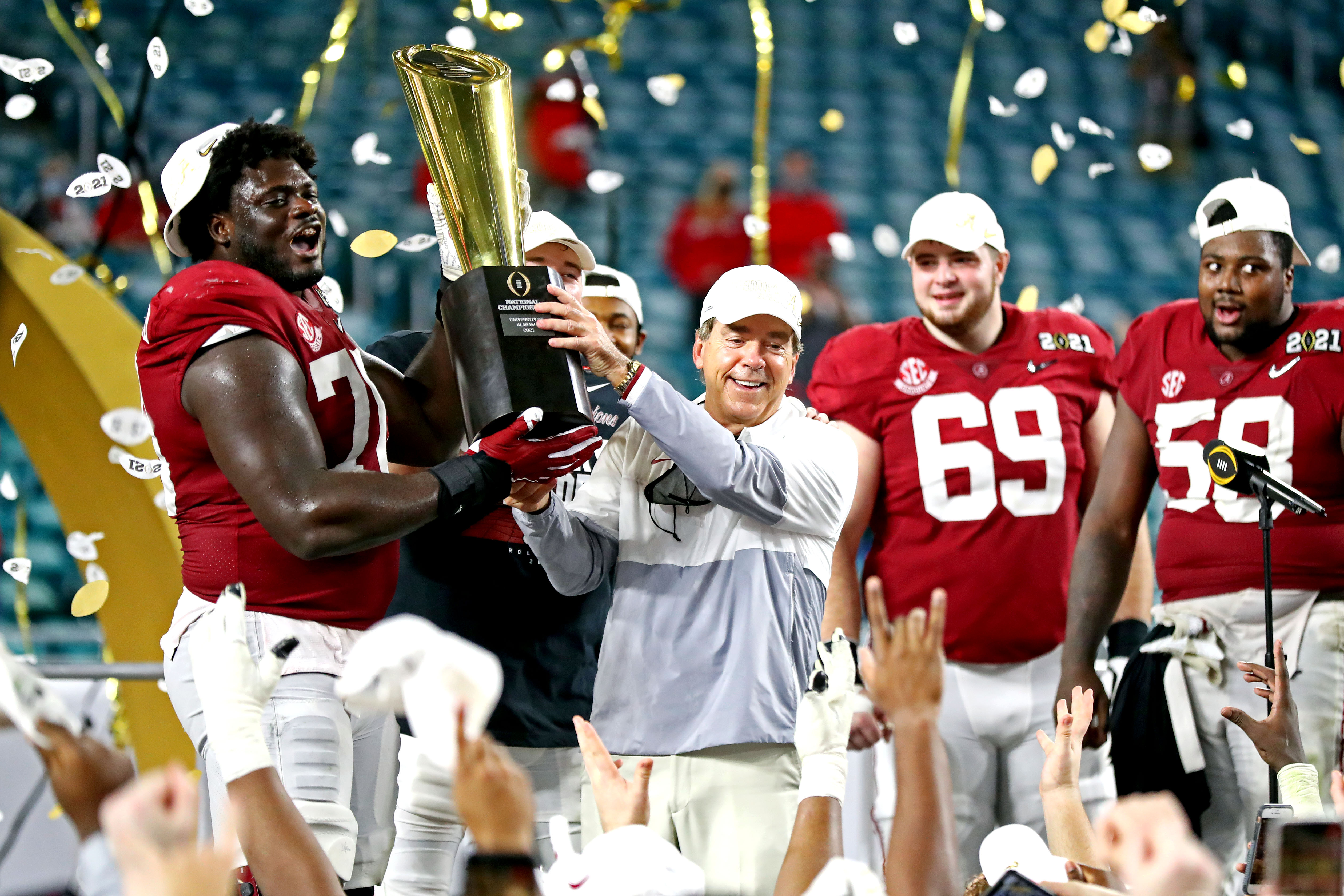 In 2014, the first year of the College Football Playoff, the selection committee could not and would not commit to presenting a clear and ordered set of criteria for inclusion in the event.

Why is this so hard?

Do conference championships matter more than strength of schedule?

Does the quality of a team’s best win matter more than the negative components of a team’s only loss, if it is a one-loss team?

Do two-loss teams playing the toughest schedule in the country get preference over a one-loss team which played a powder-puff schedule? We need to know which matters more, and the College Football Playoff — which has not been consistent AT ALL in its first seven years — has to deliver consistency if it is going to survive beyond 2025. No one expects this consistency, however, which is why the playoff has rubbed so many people the wrong way.

This was avoidable. The 2014 inaugural run set the wrong precedent.

Let’s start fresh in 2021 by emphasizing actual merit more, and taking the soap-operatic and theatrical elements out of this process. Just tell everyone what the most important criteria are, and then we can judge fairly.

Put in specific rules and qualifiers, too, so that no one can game the system or be unfairly included at the expense of a more deserving team.

For instance: If all five Power Five conference champions are allowed into an eight-team playoff, but the Pac-12 champion loses three games, that Pac-12 champion shouldn’t get an automatic berth. Teams with three or more losses have to go to the back of the line. A system for including other teams has to be formulated.

This is like the NFL requiring division champions to win at least nine games to make the playoffs. Common-sense fixes such as this would greatly improve the College Football Playoff.

Predicting which college football teams will improve — and which will slump

Predicting which college football teams will improve — and which will slump