The Blues coaches could not be clearer in their message, with five changes to their starting pack to face the Hurricanes on Saturday night at Eden Park. The big boys have been challenged to deliver as this ambitious franchise faces a crucial juncture in its Super Rugby Aotearoa season.

The Blues suffered a second successive defeat last Saturday night in Hamilton when a last-minute Damian McKenzie try denied them a victory they scarcely deserved on the back of a fumbling, off-key performance. At 2-2, on 10 competition points, they are now locked in a tight battle for second, and a spot in a final that will almost certainly be played in Christchurch.

It was notable that Leon MacDonald’s men had failed to make the impact expected in the forward battle against the Chiefs. Their scrum, with those four All Black props, had been disappointing. They lost three lineouts on their own throw. Even that power-packed loose trio, with the exception of the outstanding Dalton Papalii, fell well short of their own high standards.

The result has been seven changes in total to the starting XV to face the Canes, five of them coming up front. “The performance overall against the Chiefs was disappointing, especially at set piece, our lack of accuracy and discipline,” said head coach Leon MacDonald. “The players who made an impact off the bench or have been working hard on the training field have earned their chance.”

Skipper Patrick Tuipulotu sits out this week to rest a bruised shoulder, but the other changes are all discretionary. All Black props Karl Tu’inukuafe and Ofa Tuungafasi come in charged to lead a response at scrum time,;Gerard Cowley-Tuioti and rookie Sam Darry form a new-look second row; and explosive firebrand Tom Robinson assumes, not just the No 6 jersey (in Akira Ioane’s stead), but the captaincy.

Assistant coach Tana Umaga continued his head coach’s theme when talking about the changes (halfback Sam Nock and second five-eighths TJ Faiane are the other two) and whether they were about responding to a sub-par performance or injecting some much-needed freshness.

“The Hurricanes have come off a win (30-19 over the Highlanders in Dunedin), they’ve got confidence, and we know when teams come off wins they bring that energy. We’ve got to match that and go past it.”

The truth of the matter is the Blues need to knuckle down and walk before they run. This is a franchise with ambitions of grandeur, but they have yet to show they can grind their way to victories in tight matches on a consistent basis. Last weekend they turned down six kickable penalties in a fruitless quest for tries via the lineout, and that came back to burn them badly at the finish.

“This competition is like test match rugby and in test matches you take points on offer,” growled Umaga. “We’ve got to make sure we’ve learnt from that.”

MacDonald, normally such a positive type, was also clear with his messaging this week.

‘We are primed to get back on track with a much better all-round performance,” added the head coach. “When we got go-forward ball we showed how dangerous we can be. But we need to be more accurate at set-piece, and continue to improve in terms of our discipline.

“We started the season well but lacked precision over the last two games and last week’s game was disappointing.”

The return at No 12 of Faiane, a talisman for the Blues, should help. Harry Plummer’s defence down the inside channels was exposed early on last week and the Auks must tighten that this week against the threat of Nagani Laumape, Jordie Barrett and co.

“He brings energy, and a real nous,” said Umaga. “He’s coming off long-term injury, and we’ve tried to play him back into form … we’ve got our experienced 12 in, and he’s going to bring that leadership that helps us get what we want.”

The Canes understand fully what’s coming their way. Off the back of their first win of the season, and that 30-point haul from Barrett, they are braced for a physical examination at the hands of that big home pack. The Blues will want to put the dangerous visiting backs on starvation rations.

“The Blues will be firing after their result last week,” noted Canes captain Ardie Savea. “We know what’s coming and we know they’re excited to be playing at home. But this is an important game for us too.

“We’ve got to be on point because any moment we switch off and give them a sniff, we’ll be punished. It’s about nailing our job for the full 80 and being up for the challenge.”

The Blues forwards are on notice. The Hurricane big boys should be too.

LOOK: MMA fighter appears to lose a finger during his fight at CFFC 94 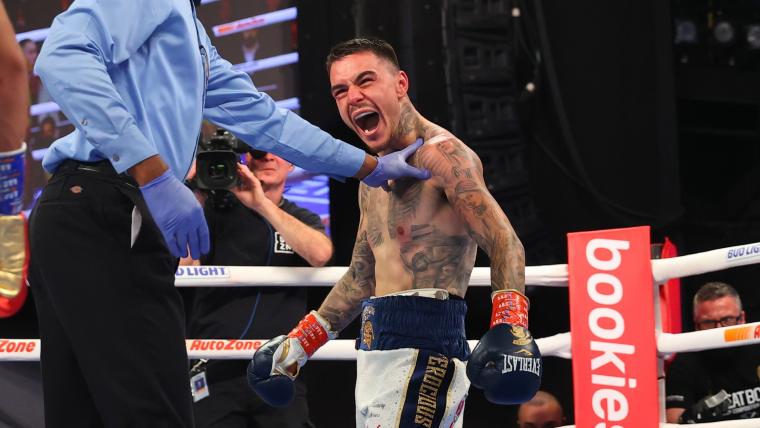 Maritzburg United leave it late, but hold AmaZulu to a draw