Get the latest Syracuse news delivered right to your inbox.
Subscribe to our sports newsletter here

Liverpool High School’s athletic director Ari Liberman knew it was time for a coaching change. It was the end of the 2014-15 season, and then-head coach Matt Jacob had secured one winning season in his four-year tenure with Liverpool boys basketball.

Liberman, a new hire himself, had only witnessed the most recent 8-12 season during 2014-15. But with the program’s results declining, and the most recent Section III title in 1999, he wanted new leadership. Liverpool didn’t renew Jacob’s contract in April, and the process to hire his replacement began during the 2015 summer.

That summer aligned with former Syracuse basketball player Ryan Blackwell’s search for a coaching job. He’d played professionally in Japan from 2006 to 2010, later becoming the coach of the team he played on, and worked a varsity coaching gig at IMG Academy upon his return to the U.S.

Blackwell had plans to coach a newly jumpstarted semi-professional team — the Syracuse Shockwave — but the program disbanded before players stepped on the court. That’s when Blackwell met Liberman.

Lazarus Sims, a former SU basketball player himself, was friends and former high school classmates with Liberman. Blackwell and Liberman connected, and by early July, Blackwell was hired.

“He had an outstanding resume,” Liberman said.

Since arriving at Liverpool, Blackwell has led the Warriors to a Class AA New York State Championship title — the first in school history —  and four winning seasons in six years. The former Syracuse star transformed Liverpool from a bottom-tier Class AA team that went five straight years without a winning league record into a state title contender. The Warriors finished 9-3 in 2020-21, too.

“He’s made our area better … He’s made us all better as far as coaches,” West Genesee head coach Frederick Kent said. “He represents Liverpool, and in a great way, in his program.”

Three years prior to taking the role in Liverpool, though, Blackwell wasn’t sure he wanted to be a coach. He was playing professionally in Japan for the Osaka Evessa when his body began to “break down.” He contemplated returning to the court for another year when his teammates asked him to fill their coaching vacancy. For Blackwell, it was unexpected, “one of those things that I kind of just fell into.” He continued coaching at IMG and with Boeheim’s Army as part of The Basketball Tournament, even trying out broadcasting briefly before taking charge at Liverpool.

As a coach, Blackwell drew inspiration from his former coach Jim Boeheim and his professional coaches in Japan. His background as a former SU player automatically earned the respect of his players and those around the program. Blackwell emphasized “the little things” for his players, setting out to reform the team from within.

“The guys just gravitated towards that,” Blackwell said of the new mindset he brought to the team. “(They) really bought into what I was trying to teach them.”

Former Liverpool player Charles Pride played for Blackwell over two seasons. Pride and his teammates grew up idolizing Syracuse basketball players, and being coached by one raised the standard for the team. From the start, Blackwell ran intense practices that included 5-on-5, 4-on-4, 3-on-3 and 1-on-1 games and drills that emphasized fundamentals, Blackwell said. Each day, the team challenged one other “from the top of the roster to the bottom.”

“He would have us literally going at each other every single day. Our practices were way harder than the game,” Pride said. “So we knew that we were going to win.”

Blackwell said his coaching style is “like a big brother.” Practices have always been intense under him, but he rarely raises his voice at his players, even when things are going wrong. Instead, he teaches players to channel frustration into accountability. Because of that style, players confide in Blackwell on and off the court, Pride said.

Pride, who now plays for Bryant University, FaceTimes Blackwell once a week to talk about basketball and his personal life. When Pride goes home for breaks, he works out with Blackwell, and the two grab meals together.

“They understand that I’ve been at that level they want to get to … I’ve worked hard to get to where I was,” Blackwell said. “So preaching that to them, they know that’s coming from somewhere that’s real.”

In his second season, Blackwell led Liverpool to a Section III title. In his third season, the Warriors had an undefeated (26-0) regular season and claimed the 2018 New York State Class AA title. In 2021, Blackwell and his team were in a battle for first place before West Genesee snapped Blackwell’s seven-game win streak.

Kent recalls Blackwell’s similarities to Boeheim in terms of strategy, game planning, the 2-3 zone and so on. Blackwell strikes a balance between letting his players make their own decisions on offense and teaching them to play smart, Kent said.

“He’s not gonna let you do your regular thing,” Kent said. “He always has a bunch of weapons. They always get better as the season goes on, because he’s a good coach.” 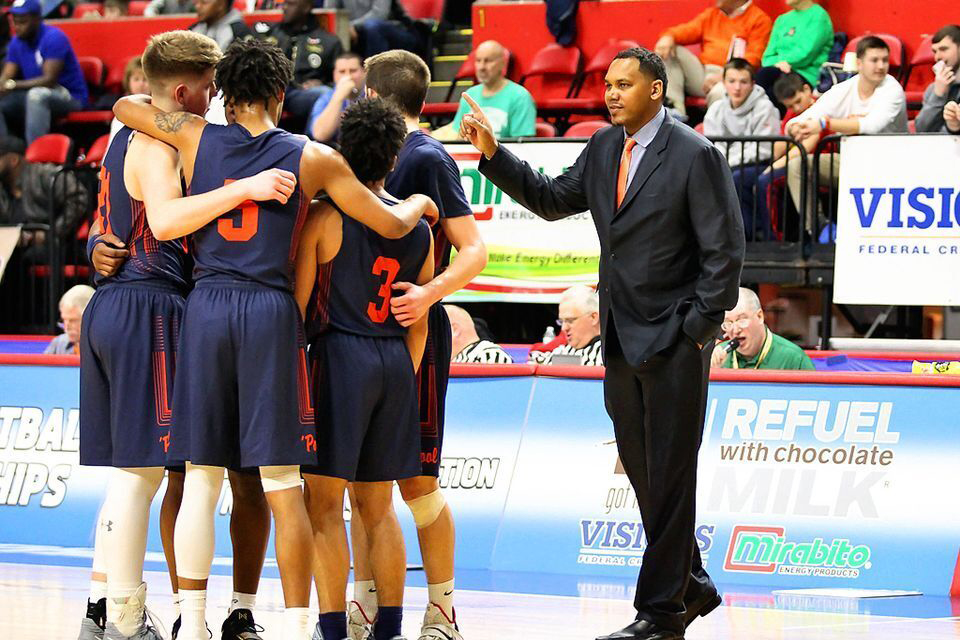 Blackwell coaches for Liverpool High School. He led the team to its first-ever state title. Courtesy of Courtesy of Dennis Nett | Syracuse.com

After its loss to West Genesee, Liverpool picked up two games and dropped two more, finishing second in the standings and marking his fourth winning season in six years.

Blackwell has no plans to leave Liverpool soon. The school just built a new gymnasium and athletic complex, and Blackwell’s team received special permission from the administration to utilize the new facilities prior to the abbreviated 2021 season.

Blackwell says his formula hasn’t changed. He continues to stress the importance of work ethic and competition through intense practices, ones that now take place in the new gym.

“Kids want to play for him because of his reputation. He’s very intelligent, and he does what’s best for his kids,” Kent said. “Everyone has a lot of respect for the way he carries himself and his players.”