MOORESVILLE, N.C. – Austin Cindric and Matt DiBenedetto find themselves in a unique and seemingly awkward position with the beginning of the 2021 NASCAR season.

They already know that in 2022 Team Penske’s Cindric is replacing DiBenedetto at the Wood Brothers, which has a technical alliance with Penske. Most would consider the situation a blueprint for a disastrous, strained relationship, but the two men say that’s not the case.

“Actually, Austin is a great friend of mine,” DiBenedetto said. “We literally snapchat each other every single day. I love hanging out with Austin. It’s not weird at all.”

The 22-year-old Cindric said the two developed a “really good relationship” last year when their 2021 season plans were unknown.

“We talked pretty much on a daily basis, whether it was sending each other stupid pictures or communicating about racing stuff,” Cindric said. “I’ve enjoyed my relationship with Matt and we’ve joked about it. We used each other as sounding boards as far as what’s going on.” 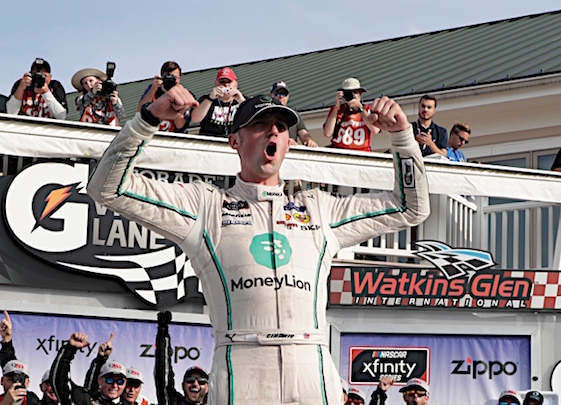 Austin Cindric says his friendship with Matt DiBenedetto is  the key to living with an odd situation. (RacinToday/HHP file photo by Harold Hinson)

This year Cindric will defend his NASCAR Xfinity Series title and compete in selected Cup events. His first venture into the Cup Series this season will occur at Daytona International Speedway when he attempts to qualify for the Daytona 500 in a fourth Team Penske entry. The 29-year-old DiBenedetto is competing fulltime in NASCAR’s Cup Series in the Wood Brothers iconic No. 21 Ford, and Cindric believes it will be the California native who gives the team its 100th victory.

“That’s something they’ve (Wood Brothers) been looking for, for a lot of races now, a couple seasons, and I think he’s the guy to do it,” Cindric said about DiBenedetto. “I fully expect to be racing for triple digits by the time I get in the car.”

DiBenedetto came close to providing the Wood Brothers with that 100th victory twice last season when he finished second in both Las Vegas races. His other top five came at Kentucky where he placed third. He garnered another eight top-10 finishes before placing 13th in the standings, his best ever.

DiBenedetto notes “this sport is a business and everyone has the same goals.” Those goals: To win races and championships and be around the sport for a “very long time.”

“I’m confident, especially with the opportunities I’ve been given, so, no, it’s not (an) awkward (position) at all,” DiBenedetto said about his and Cindric’s situation. “It’s just part of the business and things work out the way that they’re supposed to.

“I think people understand a little bit of my path to get here and the struggles and the pressure and everything that I’ve overcome. It’s humbled me to an extreme that I couldn’t possibly explain, but it’s also made me so mentally tough. I’m thankful for that because it’s made me who I am today. I think there are gonna be great opportunities for me in the future and I’m just pumped about this year.”

The 2021 season kicks off at Daytona International Speedway Feb. 9 with the Busch Clash. Daytona 500 qualifying, which determines the starting lineup for the qualifying races, is Feb. 10. The Feb. 11 qualifying races set the field for the Feb. 14 Daytona 500.