Zahir Khan can be a good budget bowling pick.

The second Test of the two-match Test series between Afghanistan and Zimbabwe will be played at the Sheikh Zayed Stadium in Abu Dhabi, on 10th March, Wednesday.

After losing the first match of their first ever 2-match Test series, Afghanistan will try to give their one hundred per cent when they will take on Zimbabwe for the second Test. In the first Test, it was mainly their batting unit that brought their downfall.

Zimbabwe’s batting was not impressive either, but such was the dominance of their bowling unit that Afghanistan could not reach the 150-run mark in either innings. Given the last game’s results and also the current form of both teams, Zimbabwe will start this game as the favourites.

Like always, the Abu Dhabi weather will be perfectly fine for a game of cricket. The temperature will be around 28 °C with the sun shining bright in all the days.

The surface here in Abu Dhabi is a balanced track. Batsmen will just need to ensure that they spend some overs to find their feet and don’t jump the gun too early.

Rashid Khan suffered a finger injury and could not play the first test, but he is likely to play in the second Test.

Sean Williams was the highest run-scorer in the last game. While almost every other batsman struggled to get going, he scored a century.

Victor Nyauchi picked up 3 wickets in each innings of the first Test. Arguably, his most important scalp was that of Ibrahim Zadran in the first innings.

Regis Chakabva can be a decent budget pick. He was Zimbabwe’s second-highest run-scorer in the last game. Coming to bat at a crucial time where the visitors were facing a collapse, he steadied the ship by scoring 44 runs.

From the same team, Wesley Madhevere is another decent budget option. While he was dismissed for a duck in the last game, Madhevere has scored 227 runs in 6 ODIs at an average of nearly 40.

Rashid Khan is likely to be back in action for this game. The mystery spinner has picked up 23 wickets in just 4 Test matches, which includes three 5-wicket hauls. 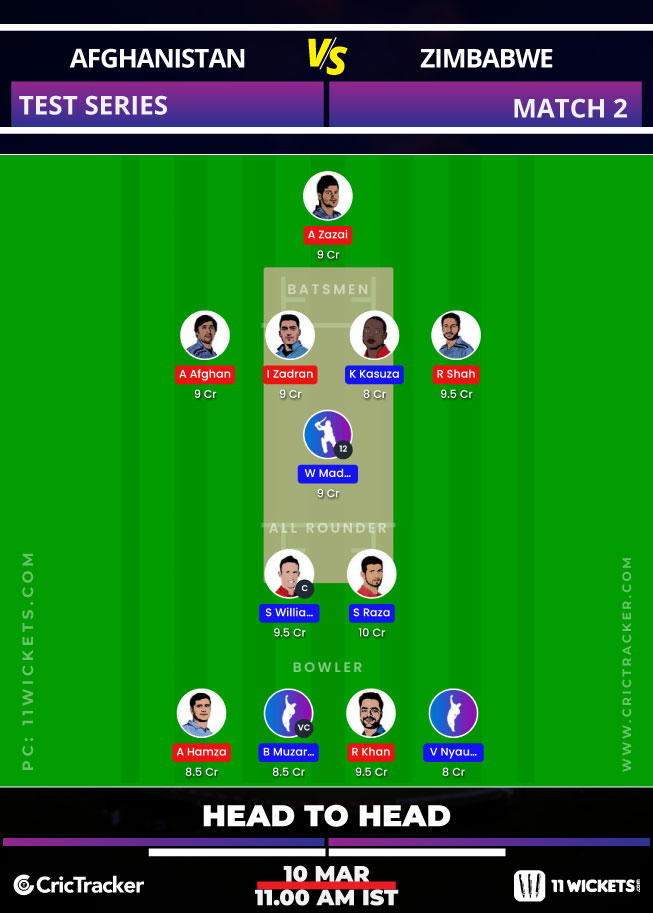 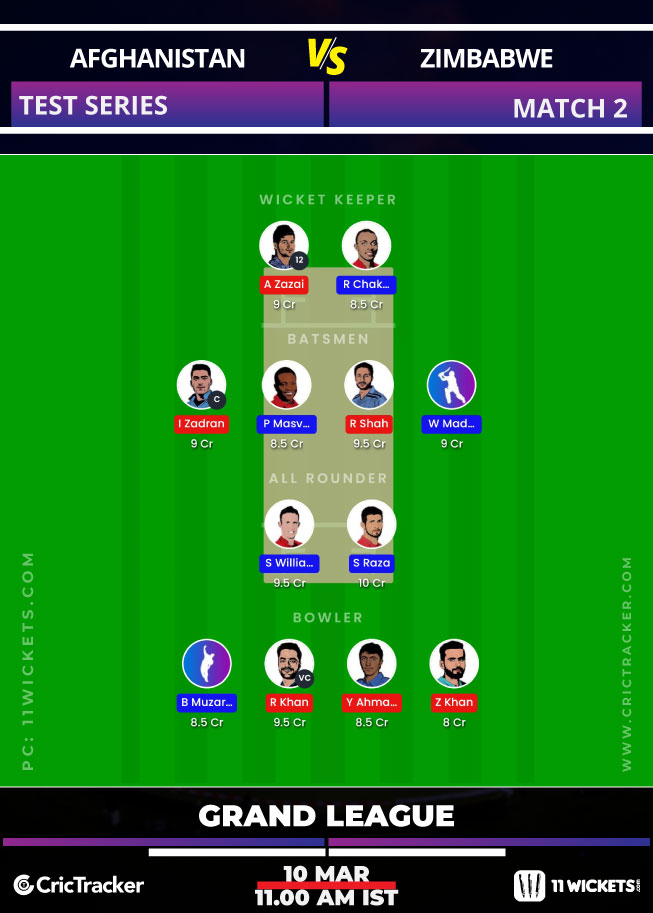 Zahir Khan can be a good budget bowling pick. He has picked up 7 wickets in just 3 Test matches and has an average of under 35.

Zimbabwe is expected to win this match.

Note Updated Fantasy teams and Playing XIs of every match will be provided in our Telegram channel if the information is available.