At a time when the Babar Azam-led side is hoping to move on after facing the wrath of disappointed fans following an abysmal series defeat at the hands of Kane Williamson-led New Zealand, a Pakistani channel opted to lift up the mood of its viewers by overselling Imran Khan’s narrow win over Indian skipper Virat Kohli in a Twitter poll. Interestingly, the Pakistani channel went an extra mile by showing the Twitter poll victory over the Indian skipper Kohli as ‘Breaking News’.

On Wednesday, the official Twitter handle of the International Cricket Council (ICC) kickstarted a special poll and asked the fans of the gentlemen’s game to choose one captain from the list of four elite players. The ICC conducted a unique poll to highlight the accomplishments of four charismatic leaders who went on to elevate their game after taking over the captaincy duties for their respective national teams. 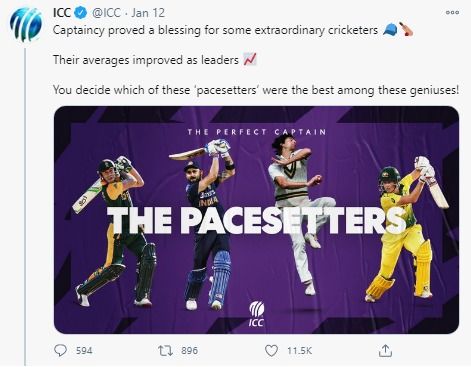 Taking cognisance of the poll results, a Pakistani channel tried to cash in on Imran’s win over Kohli by running it on air as ‘Breaking News’. However, the Pakistani channel was heavily trolled by the Twitterati for showing Imran’s mediocre poll victory as a piece of hard news. Here’s how the internet warriors roasted the Pakistani media on the microblogging site.

Talking about ICC’s ‘pacesetters’ poll, the social media handle of the world governing body of cricket had selected the four players on the basis of their improved averages as captains. “The indomitable Imran Khan has emerged as the highest-rated captain, beating Virat Kohli, Meg Lanning, and AB de Villiers in the poll,” the ICC said in a tweet while announcing the winner of the poll.

Regarded as the greatest leader of the Green Army, Imran had guided Pakistan to its maiden World Cup title in the 1992 edition of the showpiece event. The former Pakistan all-rounder had an average of 52.34 as the captain of the Asian giants. The current Pakistan Prime Minister played 88 Test matches and 175 One Day Internationals (ODIs) for the Men In Green.