As a coral sun set behind the Melbourne skyline, Naomi Osaka walked to her mark, danced lightly on the balls of her feet, rapped her left thigh with her left fist two times, and crouched, ready to receive Jennifer Brady’s serve. She did this over and over: jig, tap, dip; jig, tap, dip. It was a meditation that secured a second Australian Open title and a fourth grand slam for the dominant force in women’s tennis.

Both finalists powered through the draw behind dominant first serves, but an unexpectedly cool and blustery evening proved disruptive. The wind was not strong, but it was capricious, darting around Rod Laver Arena like a poltergeist, spooking the contenders at their moment of focus. Neither player averaged over 45% of first serves during an opening set littered with apologetic waves for errant ball tosses.

The third seed had to find another way to earn points, so she bullied them off Brady, taking returns early, firing them deep to her opponent’s toes and using that platform to dominate the court. “I felt rushed, like she was applying pressure,” Brady admitted. Time and again Osaka returned to the baseline, raised her calves, punched her quads, and took care of business.

“I wanted to return well,” Osaka said. “It’s something I’ve really been trying to target during this tournament and I feel like it’s been working out pretty well. My serve wasn’t too great today but my returns really helped me a lot.”

When she was a 15-year-old phenomenon, Osaka shared that her favourite shots were her forehand and serve, “because I feel like I can end the point any time I want.” Ordinarily that is the case. It was against Serena Williams in the semi-finals, and especially so in closing out a fourth-round clash against Garbiñe Muguruza that was rarely on her racket. Here she did not have that luxury, but demonstrated not everything has to be in her favour to prevail.

“She played really well when she had to,” Brady said. “She hit good shots when she needed them. And in those moments that’s the toughest time to find those shots.”

Since the start of 2017, when Williams collected her 23rd major title, there have been 12 different winners of the 16 slams on offer. During that period only two players have won multiple slams: Simona Halep, with two, and Osaka, with four. She has filled a void, becoming the first player since Maria Sharapova in 2012 to reach that tally. It is her fourth season in a row with a major title. “She’s just a boss, man,” boyfriend Cordae told GQ recently. “She’s a killer.”

This was the first of Osaka’s slams to arrive after entering the final an overwhelming favourite. Like with every challenge in her career to date, it was one she scaled with aplomb. “I think I fight the hardest in the finals,” she said after vanquishing her idol in the semis. “I think that’s where you sort of set yourself apart.” It is competitive instinct straight out of the Kobe Bryant playbook, a mentor she called an older brother and an uncle.

Such insatiable drive still feels at odds with Osaka’s off-court personality, which remains disarmingly adorkable; the 23-year-old wears her greatness lightly. But, as Jayne Hrdlicka, chair of Tennis Australia, put it during the presentation of the Daphne Akhurst Memorial Cup: “In the last 12 months, you have stepped into your voice.” This was in reference to Osaka’s powerful mask-wearing statement at the US Open, and her growing willingness to engage in public debate on sensitive issues including violence towards Asian Americans and the resignation of Yoshiro Mori as president of the Tokyo Olympics organising committee. “You’ve made a huge difference in everything you focused on and it is truly inspiring and an opportunity for all of us to step back and look at the ways we can make a difference in the community,” added Hrdlicka.

The first Australian Open trophy Osaka won, in 2019, resides on a plinth in the corner of her living room in Los Angeles. One of her US Open trophies lives nearby, closer to the television. She might need to follow in more of Williams’s footsteps soon and construct an entire room dedicated to silverware. This will not be the last shiny cup engraved with Osaka’s name.

Back in that teenage interview, Osaka stated, with the same understated sotto voce she used on the podium in Melbourne: “My goal is to become a tennis legend. I will do anything in my power to get there.” Mission accomplished. 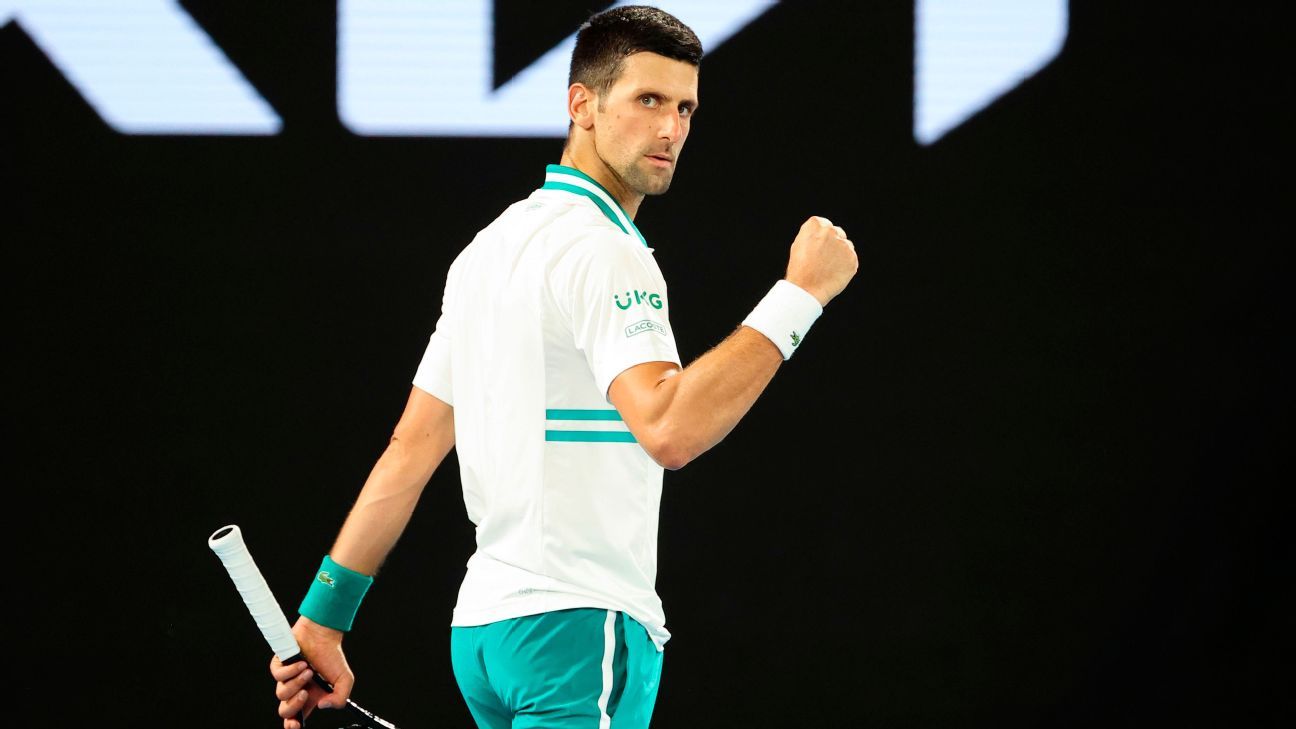 Novak Djokovic breaks Roger Federer’s record for most weeks as ATP world No. 1