Kevin Holland is MMA Junkie’s 2020 “Breakout Fighter of the Year.”

Holland, whose first fight of 2020 took place in May, made UFC history by becoming the fastest man to notch five wins in a calendar year, doing it in 210 days. Four of his wins came by finish, and he took home three “Performance of the Night” bonuses along the way.

One of the most active fighters on the roster, Holland kicked off his 2020 campaign with a 39-second finish of Anthony Hernandez at UFC on ESPN 8 in May. He followed that up with a third-round finish of Joaquin Buckley in August, who went on to score one of the greatest knockouts in UFC history.

Just over a month after stopping Buckley, Holland made a quick turnaround to face Darren Stewart at UFC on ESPN+ 36 in September. He edged out the Brit in his only decision win of the year.

At UFC on ESPN+ 39 in October, Holland stepped in for Krzysztof Jotko to face Makhmud Muradov. But after Muradov tested positive for COVID-19, Holland ended up facing newcomer Charlie Ontiveros, whom he finished via slam in Round 1.

When Darren Till was forced out of his main event vs. Jack Hermansson at UFC on ESPN 19, the UFC knew to call “Big Mouth.” Holland accepted the fight on short notice, but was forced to withdraw after testing positive for COVID-19. Instead, Marvin Vettori, who was slated to face Ronaldo Souza a week after, got the replacement call.

However, Holland’s willingness to compete against anyone at anytime would pay off, as he was rewarded with another big opportunity when he faced Souza at UFC 256. It would be Holland’s best performance to date, where he was able to score a knockout of the perennial contender and jiu-jitsu ace off of his back in one of the best finishes of the year.

Not only did Holland become a fan favorite, he became a middleweight contender. The 28-year-old was able to go from prospect to dangerous contender in just seven months – not bad for a fighter who failed to impress his boss despite securing a win on Dana White’s Contender Series.

Khamzat Chimaev went from relatively unknown to one of the most popular fighters on the roster in the span of five months. Chimaev’s rise has been unparalleled, where he was remarkably able to amass over 1 million followers on Instagram since joining the UFC roster.

The Chechnya-born Sweden-based fighter had one of the most impressive promotional debuts in history when he ran through John Phillips at UFC on ESPN 13 in July. He went on to make a historic turnaround just 10 days later at UFC on ESPN 14, steamrolling newcomer Rhys McKee.

But in his most impressive performance to date, the undefeated fighter was able to knock Gerald Meerschaert out in just 17 seconds at UFC on ESPN+ 36, showing that he’s more than just a dominant grappler. Chimaev already finds himself on the cusp of title contention when he faces Leon Edwards in a date to be determined. 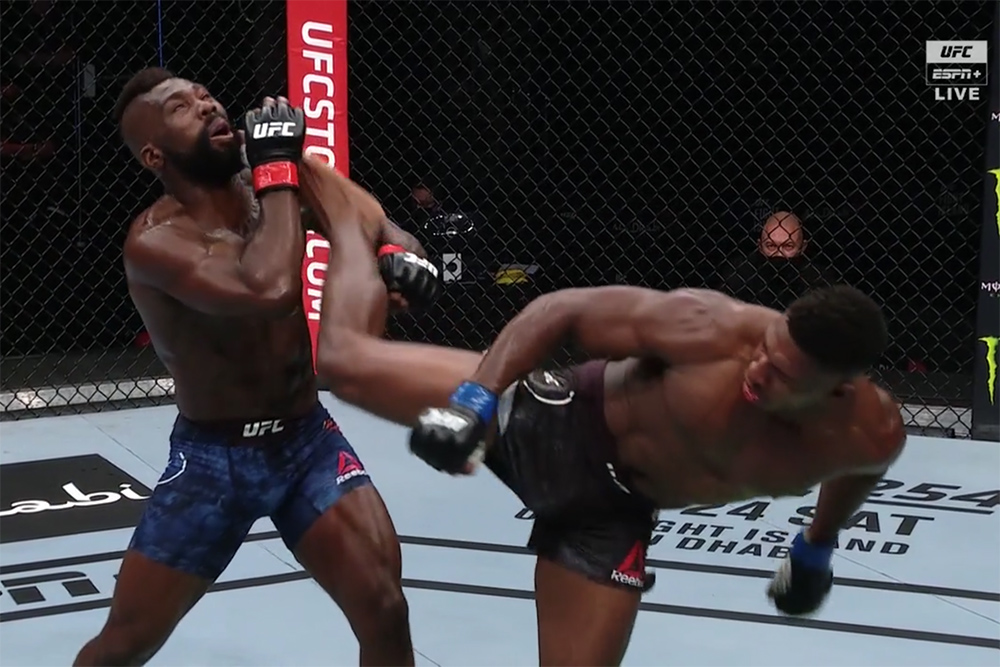 Heading into his second UFC fight, Joaquin Buckley was relatively unknown. He had suffered a stoppage loss to Kevin Holland on short notice in his UFC debut in August, but quickly got the opportunity to redeem himself.

And boy, did Buckley just do that. “New Mansa” took on Impa Kasanganay at  UFC on ESPN+ 37 and scored one of the greatest knockouts in UFC history. After Kasanganay caught Buckley’s kick, Buckley turned around and delivered a spectacular spinning back kick that connected flush on Kasanganay’s chin and dropped him to the canvas.

The viral kick knockout was the UFC’s most-watched Instagram video ever with 17.8 million views and the highlight was even included on loop in one of Kanye West’s latest tracks.

Buckley continued to ride his momentum when he made an even quicker turnaround to take on another undefeated Contender Series veteran, Jordan Wright, just one month later at UFC 255. His explosive power was on full display once again when he scored a second-round knockout of Wright. The finish earned him his second straight “Performance of the Night” bonus.

It’s been a memorable year for Buckley, who emerged as one of the most exciting breakout stars on the roster.

All Eyes on Brady, Buccaneers Offense vs. Washington Pass Defense