It’s another great Sunday of sims on the DraftKings Dream Stream this week with another six games lined up every two hours throughout the afternoon and evening. The featured three-game classic slate kicks off at 6:00 p.m. ET with some very nice matchups in play. The Jacksonville Jaguars will visit the Carolina Panthers in the first matchup on the slate, followed by an AFC North divisional grudge match between the Baltimore Ravens and the Cleveland Browns at 8:00 p.m. ET. The third and final game of the night features the New England Patriots welcoming the New York Giants to virtual Foxboro for Sunday’s edition of “Madden After Dark.”

As in all these Madden sims, it’s important to know that each roster is not impacted by COVID-19 opt-outs, injuries, suspensions or illness and that the highest-rated options have been placed at the top of the depth charts. The roster for each team includes all player movement that occurred prior to Week 1 of this season and uses the Madden 21 ratings from Week 1 of this season.

For more details, you can find the game settings, depth charts, abilities and X-factors for each team in Madden 21 along with the upcoming schedule on the Madden Stream info page. There were a few tweaks to the X-factors and Superstars in the latest December update, so be sure to check the depth charts of each team.

Check out the daily DraftKings Madden Stream contests lobby with paid contests for real cash prizes now available alongside free contests. Each simulation will be played out computer vs. computer via an online Madden Stream using Madden 21. In this format, you can enjoy watching the game stream on the DraftKings YouTube channel, the DK Live app (download here) or right here in this post.

Lamar Jackson, Baltimore Ravens at Cleveland Browns, $8,500 — Surveying the slate, Jackson has been by far the most productive player at any position scheduled to be in action. He is the only option with a salary over $8K, but he offers so much upside, he’s too good to pass up. He has averaged 107 rushing yards and 150.8 passing yards per sim, and he has been a touchdown machine, racking up 53 touchdown passes and 41 rushing scores. Jackson has had a few down games lately, but he shredded the Browns for 35.64 DKFP when they met three sims ago. In that contest, Jackson threw for 201 yards and two scores while adding a third touchdown and 106 rushing yards as well. He has gone off for over 28 DKFP in three of his four meetings with the Browns, but he was held to 5.58 DKFP in one game against them. Still, the chances of a monster game that breaks the slate are so high with Jackson, that he has to be considered a “must play” in this matchup with Cleveland.

Gardner Minshew II, Jacksonville Jaguars at Carolina Panthers, $6,100 — While Minshew has also had his busts, he does have a high enough ceiling to keep up with Jackson if he has a good game and Jackson is below his average. Minshew had 18.24 DKFP and 17.94 DKFP in his two earlier matchups with the Panthers with multiple touchdowns in each contest. He has also thrown multiple scores in four straight and six of his past seven sims, including in his most recent contest when he threw four touchdowns and had 32.6 DKFP against the Giants. He has over 21 DKFP in six of his past 12 sims, and he has shown he can offer a good return at this salary. If you’re looking to pivot off of Jackson and save some significant salary, Minshew is the best option to consider.

Christian McCaffrey, Carolina Panthers vs. Jacksonville Jaguars, $7,800 — Even though injuries aren’t factored in for these Madden sims, McCaffrey has been inconsistent throughout his 44 Madden 21 contests and isn’t typically a running back I build around. However, this matchup with Jacksonville is a juicy one, and I love his upside due to his 99 overall rating. He had 160 rushing yards, four catches, 14 receiving yards and three touchdowns in his earlier matchup with the Jaguars, producing an incredible 42.4 DKFP. Jacksonville limited him to 8.1 DKFP in the rematch, but the potential for a dominant game is still there against the Jaguars’ run defense, which routinely gives up big games. CMC isn’t as locked in a fantasy producer in sims as he is in real life, but he has had over 19 DKFP in three straight contests and is coming off a big game against the Chiefs which resulted in 37.5 DKFP.

Kareem Hunt, Cleveland Browns vs. Baltimore Ravens, $4,600 — Running Back is a solid spot to grab some value as well since Hunt is regularly involved as the third-down back for the Browns. He is a good source of PPR production as a result and is averaging 3.4 catches for 25.9 yards per sim. He has at least three catches in five of his past six games and has exactly four catches in each of his previous meetings with the Ravens. Hunt had 9.2, 10.2, 9.5 and 9.8 DKFP in those four contests with Baltimore, showing off a remarkable level of consistency. At this salary, that is solid value even without a touchdown, which is enough to make him the best available bargain play in the backfield.

DJ Chark Jr., Jacksonville Jaguars at Carolina Panthers, $6,000 — Chark has found the end zone 29 times in his 47 sims, averaging 3.7 catches for 63.8 yards per contest. That’s not great volume for a WR1, but he has been catching his passes deep and making the most of his chances. He just went off for 135 yards and 29.5 DKFP against the Giants in his most recent sim and had 112 yards and a touchdown on four catches for 24.2 DKFP in his most recent matchup with the Panthers. In his first meeting with Carolina, he also had a touchdown and 20 DKFP, so I think a similar result is definitely possible here, making him a good investment at $6K.

Dede Westbrook, Jacksonville Jaguars at Carolina Panthers, $5,100 — Much of the volume in the Jags’ passing attack has been going to Westbrook out of the slot. He has averaged 3.8 catches per contest for 51.5 yards per sim and is coming off a huge game against the Giants in which he racked up three touchdowns, 185 yards and 46.0 DKFP. He has at least four catches in four straight sims and has reached double-digit DKFP in seven of his past eight. If he gets to that level again in this favorable matchup, he’ll continue to be a very solid midrange play with a high ceiling.

Damiere Byrd, New England Patriots vs. New York Giants, $4,000 — The Patriots’ speedy WR3 has had a good ceiling in these Madden 21 sims and has been very involved lately. He has multiple catches in nine straight sims with over 11 DKFP in five of those contests. This will actually be the first time he and the Patriots face the Giants in these sims, but New York’s secondary has been very beatable out of the slot — which bodes well for Julian Edelman ($5,500) — and over the top, which should open things up for Byrd to get loose for a big play or two.

Devin Asiasi, New England Patriots vs. New York Giants, $4,400 — Asiasi has been on a great run lately with six touchdowns in his past four sims and over 15 DKFP in each of those contests. He has become a go-to option for virtual Cam Newton ($6,600) in these sims despite a disappointing rookie year in real life. Asiasi has been thriving on the great TE route tree in the Patriots’ playbook in Madden 21 and continues to find success as New England’s TE1. He is averaging 4.0 catches per contest and has now found the end zone 18 times in his 47 sims. His matchup is a good one, and he makes a lot of sense under $4.5K either at TE or in your flex spot.

Ian Thomas, Carolina Panthers vs. Jacksonville Jaguars, $3,900 — Another TE that got some hype as a breakout candidate coming into the year but struggled during the season in real life, Thomas has been solid in these sims as well. He has averaged 3.7 catches for 41.2 yards per sim while scoring seven touchdowns. He has at least three catches in eight straight sims and usually gets enough PPR points to be a viable play under $4K. He doesn’t get a lot of deep looks or have great skills to make plays after the catch, but his target share and red zone action do make him a solid cheap pivot.

Patriots DST vs. New York Giants, $3,100 — The Patriots have been one of the best DST plays in Madden 21 and have forced 55 turnovers in their 48 sims while also picking up 81 sacks and scoring 10 touchdowns. They have been boom-or-bust lately but do have double-digit DKFP in three of their past five sims. They should be able to limit the inconsistent Giants and force Daniel Jones ($5,800) into turnovers in this plus matchup. The fact that they are only a little bit more expensive than DSTs they have been vastly out-producing makes them a very attractive play at this salary.

Jaguars DST at Carolina Panthers, $2,800 — The Jaguars’ defense has struggled to stop the run in these sims, as mentioned above, but it has also come up with enough big plays to be my favorite value consideration on this slate. The Jaguars have 83 sacks and 27 takeaways in their 47 sims, and they have picked up eight of those takeaways in their eight most recent contests. Carolina’s offensive line play hasn’t been good in these sims, leading to CMC’s inconsistencies and plenty of pressure on Teddy Bridgewater ($6,400). If that trend continues, this should be a good spot for the Jags’ defense.

ICC takes cricket to Mars, netizens predict England would whine over the pitch there too

Clemson football's 'humble assassin' plucked out of heart of Texas 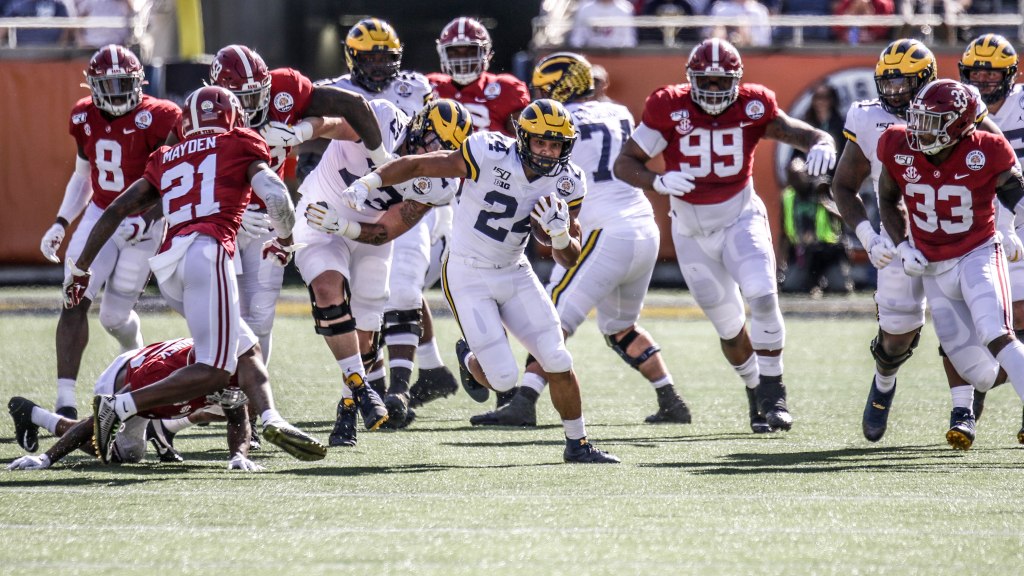