It was already the best weekend of Drew Mathews’ life, even before the final putt dropped. The then-28-year-old financial systems analyst at Lockheed Martin—a former mini-tour player—had just married his sweetheart, Amanda, and driven their entire wedding party from his home in Florida to Nashville and back. The wedding festivities had prevented Mathews from watching a single shot of the Masters telecast, but it didn’t matter. A second life-changing moment was about to happen whether he knew it or not.

Mathews had Google Maps open on his phone, navigating the last stretch of I-75 outside Gainesville, Fla., when notifications began popping into his Twitter account. He ignored them as long as he could, until his eyes finally saw the news: Patrick Reed had won the 2018 Masters, and Mathews had picked the winning lineup in a fantasy-sports betting game called the DraftKings Millionaire Maker. The groom was about to collect $1 million.

Mathews waited until his friends and family left their apartment to tell Amanda so they could share the excitement together. “It’s one of those moments where it’s hard to describe,” Mathews recalls. “You’re enjoying it, but you’re in such shock, so we weren’t crazy-celebrating because we really couldn’t believe it happened. It’s not a normal thing that your mind has been ever taught to handle.”

More golf fans than ever are dreaming of payoffs like that these days. DraftKings, FanDuel and other daily fantasy sports, or DFS, are just part of a golf-gambling boom. Interest in betting on golf tournaments is surging in Las Vegas and elsewhere, with active encouragement from the professional tours. Gamblers in many states are using mobile-phone apps such as William Hill, Bet365, FanDuel and BetMGM to place legal bets on golf.

To further satisfy golf gamblers, the PGA Tour and European Tour are rolling out a new game with IMG Arena that allows fans to place live bets on players on par-3 holes, including a live video feed overlaid with betting odds. It was scheduled to debut in May or June, but the coronavirus derailed that plan. Though there was a soft launch at the end of 2020, it will unveiled in early 2021.

This latest surge in legal sports betting dates to 2018, when the U.S. Supreme Court overturned the Professional and Amateur Sports Protection Act of 1992. Since 2018, 21 states and D.C. have joined Nevada in permitting legal sports betting. All in, gamblers legally bet more than $13 billion on sports in 2019, up from $6.6 billion in 2018.

Golf still represents just a tiny sliver of that pie. It accounted for about 1 percent of all legal sports betting in 2019, or roughly $150 million in wagers. But betting companies, known as sportsbooks, are bullish on its growth potential. “We always treated golf like NASCAR or auto racing—somewhat ancillary sports,” says Jeff Sherman, vice president of risk management and an oddsmaker at Las Vegas-based Superbook USA. “Lately, golf has accelerated past NASCAR. It’ll never touch betting interest in major sports and college football and basketball, but it’s right behind it. People love to bet a little to win a lot, and that’s exactly what golf offers with so many different golfers, often at high odds.”

In the weeks after the PGA Tour’s return after the coronavirus shutdown, DraftKings held a Millionaire Maker, normally reserved for majors, every week—and reached its maximum number of entrants each time. The Charles Schwab Challenge, the first event back, was DraftKings’ most heavily bet PGA Tour event ever. FanDuel reported that the Charles Schwab and the next week’s RBC Heritage had 10 times more betting on its platforms than those tournaments did last year. In Vegas, Sherman saw the same thing. The Travelers Championship, the third week, was three times as popular as a normal tour event. “We’ll get a lot of repeat customers after this boom,” Sherman says. “I think people will stick with golf.”

Tour officials love the sound of that. DFS and sports betting represent “perhaps the most dynamic opportunity” for connecting with existing golf fans and attracting new ones, says Norb Gambuzza, the PGA Tour’s senior vice president of media and gaming. Gambuzza’s role was established by the tour two years ago, after the Supreme Court’s ruling on legal gambling.

In February, the tour announced a deal with the Action Network, whose GolfBet service helps users make and track their bets in DFS games and sportsbooks. Its content appears on the tour’s website and in its social-media feeds. Gambuzza declined to comment on the financial details of these contracts.

It’s a notable turnabout for a sport that long shunned gambling. Former commissioners Tim Finchem and Deane Beman made their anti-gambling stances public and policed them accordingly (though punishments were never made public). When current commissioner Jay Monahan took over in 2017, his first public interviews suggested he was not opposed to legal gambling, setting the tone for the PGA Tour’s current initiatives.

Now the tour, NBA and Major League Baseball have weekly meetings to share strategy and coordinate legislative efforts. “If a state is taking a vote up, we’re going to go and make sure that body hears from our professional sports leagues,” Gambuzza says. “Given the pace of legislative efforts going on, it’s fairly high-touch.”

The leagues are also paying close attention to fan behavior. Though Gambuzza says the PGA Tour hasn’t put specific policies into place, the tour is preparing for security measures on-site and possible proximity restrictions if you’re on tournament grounds. After all, what’s to stop a fan who has bet on a golfer from screaming in the middle of another golfer’s swing? Or a golf variation of point shaving, with a player or caddie’s involvement?

“We talk with players with frequency on the subject,” Gambuzza says. “They’re obviously curious about what we’re doing in this space, as are all golf’s stakeholders. I would characterize the players’ position on how we’re approaching it as they’re content with our policies and procedure on it. Everybody’s focused on and sensitive to what’s happening in this space.”

Tour players are now authorized to accept sponsorships from casinos and sportsbooks, and a handful of pros have logos on their apparel or golf bags. Pros who were contacted by Golf Digest had nothing negative to say about the tour’s gambling initiatives.

Gambuzza cites the PGA Tour’s integrity policy, established in 2017, which aims to protect players on its six worldwide tours from the potential influence of sports betting. It restricts a player or caddie from gambling on any professional golf tournament. And it has hired a company called GeniusSports, which helps monitor betting activity across competitions. If it saw any abnormalities in the golf market, it would notify the tour. GeniusSports hasn’t noticed anything yet, according to a tour spokesman.

What if it did? Punishment would depend on the severity of the infraction, Gambuzza says. Sanctions could be anything from a warning or a fine—the tour historically has not announced these types of rulings—to a suspension or permanent ban from the sport. The tour wouldn’t comment on the level of severity of one infraction versus another.

The most intriguing next step for golf is the par-3 betting game run by IMG Arena. Using a mobile sportsbook app in states where gambling is legal, fans will be able to make bets in real time: closest to the hole, the lowest score, who makes birdie, who makes bogey, and so on. It will be available for all PGA Tour and European Tour events, excluding the four men’s major tournaments.

Eventually it could spread to more than just two par-3 holes per tourney. At this year’s Players Championship, canceled after one round because of the coronavirus, the PGA Tour had planned to broadcast every shot by every player on the NBC Sports Gold direct-to-consumer digital platform. Production costs might keep the tour from attempting this at every tournament on its schedule, but if it can efficiently show every shot at a handful of events, gamblers would almost certainly pay for that type of feed.

“Golf as a gambling product is the best or second-best to football,” says fantasy sports analyst Pat Mayo, who hosts a daily podcast and contributes to GolfDigest.com’s weekly Best Bets column. “You get four days of competition out of one bet or one lineup. Once people on a wider scale start to see how much fun betting on golf is, golf gambling will grow even more.”

Already, golf gamblers are starting to feel accepted in ways they never were before. In February, a group of 88 fantasy golf experts assembled at the Honda Classic for a weekend organized by another DFS expert, Ryan Baroff. The group played golf one day and attended the Honda Classic. Through donations and entry fees, the event raised more than $13,000 for The First Tee of the Palm Beaches, Baroff says. After the Honda Classic, Baroff and his partner, Joe Idone, got invited to a First Tee golf outing. “We were surprised to see we were the presenting sponsors!” Baroff says. “It said, ‘Presented by Daily Fantasy Sports.’ Which is funny, because we’re just a group of fantasy guys who like playing DFS.”

Mathews, who won $1 million on the 2018 Masters, is one of those guys. The Tuesday before his wedding, the groom-to-be sat on the floor of his hotel room with 12 members of his wedding party, doing his final research for his fantasy lineups. He is stat-focused, and he pays particular attention to greensin-regulation numbers, which he feels are often overlooked in favor of more trendy stats such as strokes gained.

His winning lineup from 2018: Patrick Reed, Rickie Fowler, Jordan Spieth, Bubba Watson, Russell Henley and Charley Hoffman. It was Hoffman’s Sunday hole-in-one, which DraftKings awards huge bonus points for, that differentiated his final score from others.

Mathews and his wife went back to work at Lockheed Martin a week after their wedding, and they’re still there today. He says he never seriously considered quitting his job. He launched a website (FantasyGolfBag.com) devoted to fantasy golf and handicapping that recently merged with a larger fantasy website, Fade the Noise. He and two other FGB staffers will write for the new site, and Fade the Noise has invested in an app Mathews developed that contains proprietary formulas to use data to better predict golf tournaments.

Mathews, who played college golf at Division II Southeastern University in Lakeland, Fla., continues to play DFS, spending about $2,500 a week on golf.

He tied for first place in an NFL contest for a $6,000 payday when Amanda went into labor last December with their daughter, Charlie. Though he hasn’t done much with the money, he did treat himself, his father, mother and wife to tickets to last year’s Masters.

“I gave the tickets to my dad for Christmas, and that was a bucket list item for both of us,” Mathews says. “It’s pretty cool DFS has allowed me to do those types of things.”

The secret to watching golf from a yacht on Hilton Head? Forget the golf | Golf News and Tour Information

The secret to watching golf from a yacht on Hilton Head? Forget the golf | Golf News and Tour Information 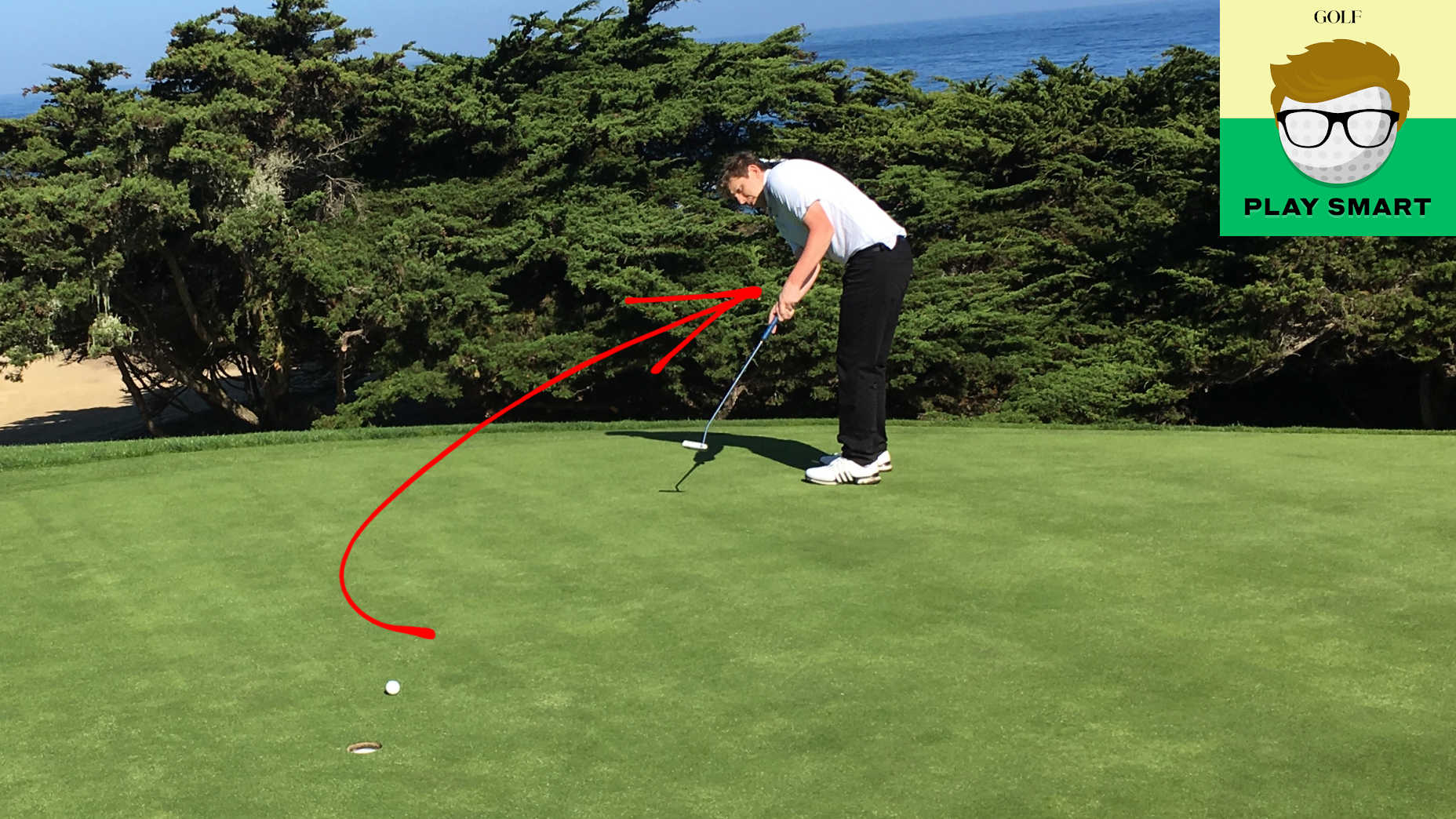 I arm-lock putted for two years and then stopped. Here’s why