It must have felt like déjà vu for Steve Kerr.

One year and one day after Golden State’s coach fielded pregame questions about coronavirus, then watched his Warriors get routed by the Clippers, the repeat took place again Thursday.

“It has been a brutal year,” Kerr said before tipoff in Staples Center, before a brutal night unfolded on the court. The Clippers led by as many as 39, rested their starters during the final quarter and won by 26.

That 2020 matchup was each team’s last before the NBA suspended its season the following day and the Clippers never again recaptured the rhythm they’d shown during their win at Chase Center once the season resumed four months later.

Following another blowout over the Warriors one year later, and with the league confident it can reach the postseason without another pause, the Clippers have two months to enter the postseason playing their best. What that potential ultimately looks like is impossible to know now, with two weeks still before the trade deadline closes and the buyout market heats up. The Clippers are certain that the ease of Thursday’s win didn’t change their opinion that “we’re not where we want to be,” Kawhi Leonard said.

Coach Tyronn Lue attributed his team’s poor communication on defensive switches to playing one game in the last seven days.

“We got to get better defensively, just communicating, understanding what we are trying to do, having a sense of urgency in transition, getting back, getting matched, talking,” Lue said Friday.

Said guard Reggie Jackson: “It’s good to know that we still have strides and leaps to grow but that we’re playing this well right now, to this point.”

Thursday was at once a reminder of the hurdles impeding such growth and the ways in which they can unlock it.

Midway through the first half, starting guard Patrick Beverley left after only 11 minutes because of a sore right knee, the same knee that cost him eight games earlier this season. Lue said the team would know more Saturday about Beverley’s availability for the upcoming three-game trip. The team must submit its injury report by Saturday afternoon.

Leonard said he has faith in Beverley to stay engaged with the team should he miss time.

If Beverley is lost for upcoming games, beginning with Sunday’s, is building continuity still possible? Kerr believes so, even with the potential absence, because of the time the roster’s core group has banked together since last season — including Lue, an assistant last year — and the additions of veterans such as Nicolas Batum.

“[Lue] is a very calming presence, he is very smart, he is a good leader,” Kerr said. “He is just a guy that is going to provide a really good culture in a good way to bring the team through a long season. I think they have developed a pretty good identity in terms of being relatively meticulous, not pushing the pace but getting the game to their tempo to take advantage of their great halfcourt personnel. Because with Paul George and Kawhi, you’ve got two of the toughest guys in the world to guard one on one.

“… It is tough to throw a group together like they tried to do last year. To me, this year looks like they are much more comfortable together and I give Ty a lot of credit for that but I also attribute that to the continuity of the group now having a second year under their belt and of course Batum coming in and really helping tie things together.”

Serge Ibaka, the starting center, understands the rhythms of a championship pursuit after winning the 2019 title alongside Leonard with Toronto, saying “the moment right now is when you have to pick your pace up” — a sentiment that includes himself.

Saying he was unhappy with the way he closed the season’s first half by being held scoreless March 4 against Washington, Ibaka finished with 16 points and 14 rebounds against the Warriors. The Clippers hope it is a preview of a more consistent second half.

“He really did a good job of setting the tone,” Lue said.

How often can he continue to do so? He is the only big man on the roster able to set picks and score behind the three-point line, a threat that opens up the rest of the offense, George said. Ibaka’s 34% three-point accuracy is four percentage points lower than last season and his points per 100 shot attempts have fallen sharply since his sensational start to the season, according to Cleaning The Glass, the advanced statistics site.

Yet his accuracy on free throws and inside the arc are close to career bests, his assist percentage is a career best and he’s grabbing a larger share of defensive rebounds — 22% — than ever.

“To me it was important to come, you know, be there for my teammates, and set the tone,” Ibaka said. “And just to let them know, like, ‘listen, whatever happened in the last game, it’s not who we are.’ So, it’s one of those nights.”

The Clippers’ potential rides on producing more of them over the next two months.

Update: Pelicans all-star center Zion Williamson is averaging 25.5 points this season and at 6-foot-7 and 280 pounds has shown the ability to bulldoze some of the NBA’s best defensive centers, Utah’s Rudy Gobert included, with his physicality when given a dribble to charge the rim. “We can’t leave Nic [Batum] or whoever’s guarding him on an island by themselves,” coach Tyronn Lue said. “When he puts the ball on the floor, we got to swarm and make him a passer. Can’t let him get behind the defense for lobs.” Williamson has 72 dunks this season and is shooting 68% at the rim.

THROWBACK: Kevin Harvick Stuns Jeff Gordon in One of the Most Thrilling Finishes in NASCAR 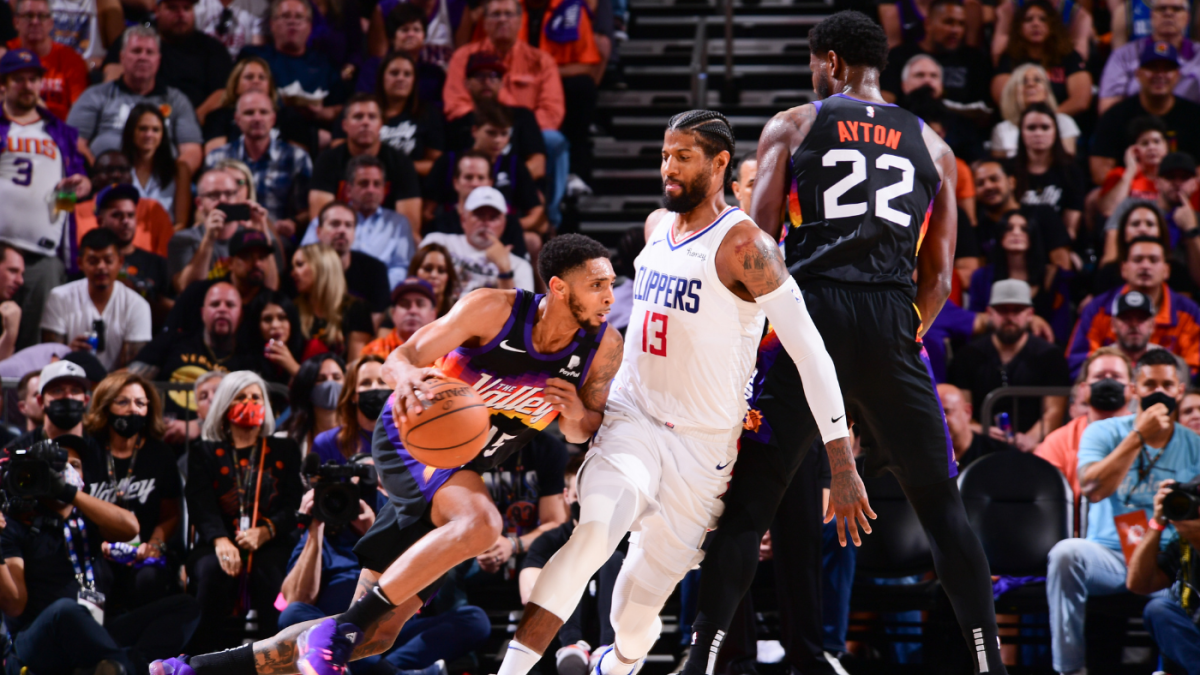