Karnataka openers Devdutt Padikkal and Rohan Kadam are doing a great job for their side by giving good starts, they must be included in your Dream11 fantasy teams and both can be picked as captains for your respective teams.

The Elite A Group match of the Syed Mushtaq Ali Trophy 2021 will be played between Karnataka and Uttar Pradesh at KSCA Cricket (2) Ground, Alur.

The match is scheduled to start at 12:00 PM local time and IST on January 18th.

Defending champions Karnataka will be up against Uttar Pradesh in the Elite A Group match of the Syed Mushtaq Ali Trophy on Monday. It will be a significant match for Karnataka as they are aiming for the top spot in the Elite A Group standings. With 3 wins and a loss, they are currently placed at the 2nd spot with 12 points and having a net run-rate of 0.259. In their previous match, they won a thriller against Railways in the final over of the match and kept their chances alive to qualify for the knockouts. They must win their remaining 2 matches on a better net run-rate for further chances of qualifying to the knockout stages.

On the other hand, Uttar Pradesh are already out of this competition having won only one of their 4 matches and they will be playing for the pride and want to upset hosts Karnataka’s dream of qualifying for the knockouts. Even though giving rest to their main players they won their previous game quite comfortably by 9 wickets against Tripura. Young skipper Priyam Garg achieved his first victory as captain and he is a great prospect in the future and he will be hoping to ensure his side finish the tournament on a higher note.

KAR vs UP Weather Report:

It’s going to be a sunny afternoon in Alur, the temperature will be ranging from 25 to 28 degrees Celsius and the humidity will be 52 percent. There is no chance of precipitation for this match.

It’s a neutral wicket, the boundaries are quite small and make it easy for the batters to clear the fence, having said slowness in the wicket will help the slow bowlers. Anything above 160 is a competitive score on this surface, whoever wins the toss should bat first.

KAR vs UP Top Picks for Today’s Dream11 Match:

Aniruddha Joshi batted superbly against Railways and ensured his side cross the finishing line, he scored an unbeaten 64 runs from 40 balls and finished the match with a six in the last over of the match.

Karan Sharma with the most runs for Uttar Pradesh in this tournament and striking the ball really well at the top, in 4 matches he has scored 127 runs at an average of 42.33 with a strike rate of 171.62.

Suresh Raina has got plenty of experience in this format and he is bringing all his experience into play, in this he has scored 98 runs in 4 matches at an average of 49 with a strike rate of 118.07.

Suggested Playing XI No.1 for KAR vs UP Dream11 Fantasy Cricket: 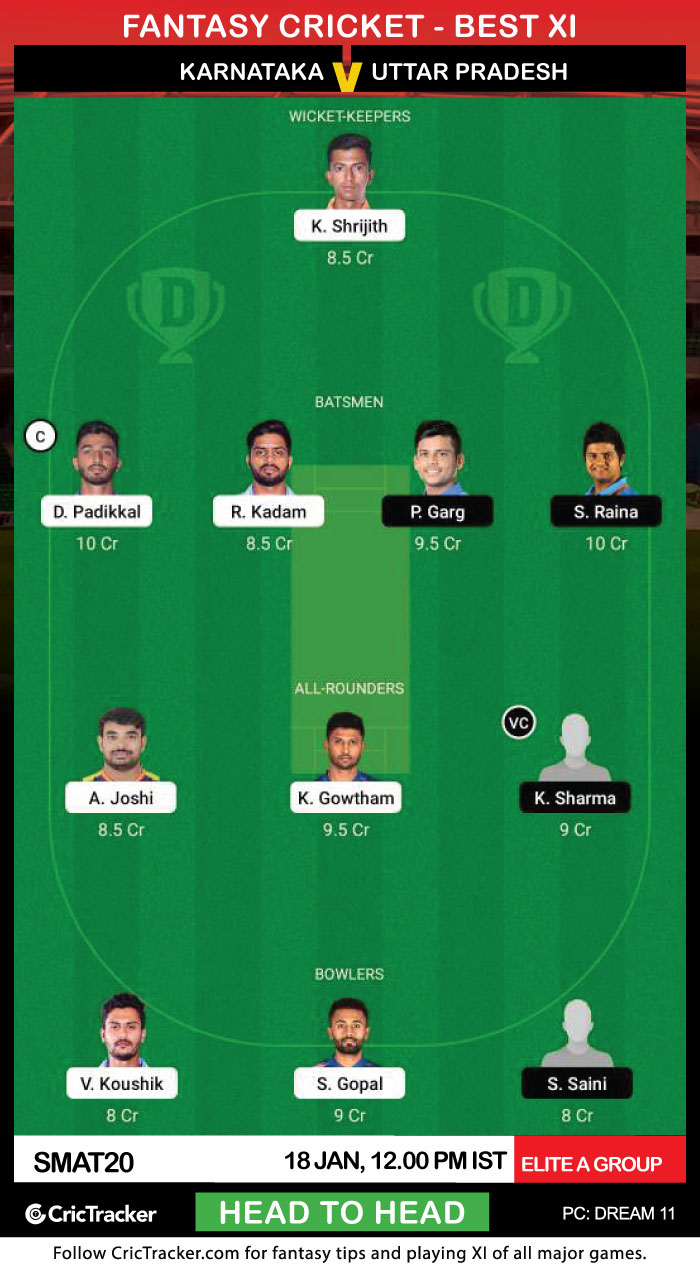 Suggested Playing XI No.2 for KAR vs UP Dream11 Fantasy Cricket: 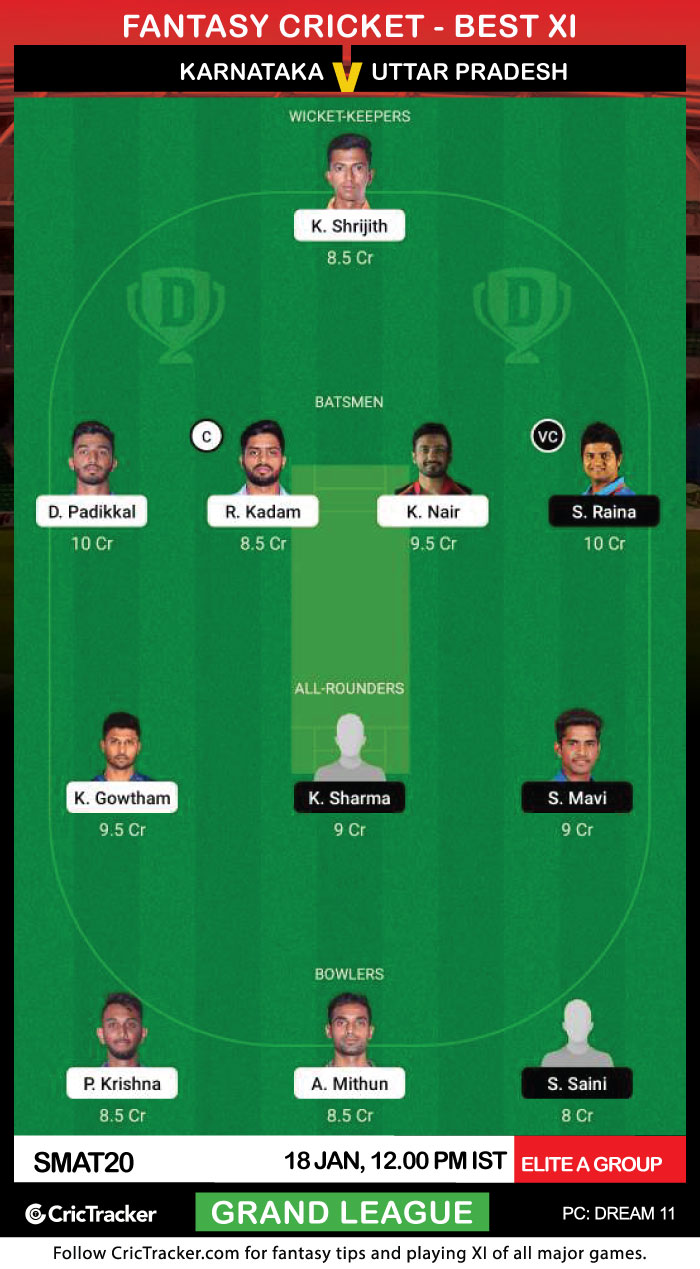 Karnataka openers Devdutt Padikkal and Rohan Kadam are doing a great job for their side by giving good starts, they must be included in your Dream11 fantasy teams and both can be picked as captains for your respective teams.

Karnataka are expected to win this match.