In 2020, India played only 10 T20s, 9 ODIs & 4Tests. This is 39 days of cricket action and only 2 T20s at home. Stadiums are empty and everyone is sitting at home and watching old replays and no team in the world cricket barring New Zealand has been able to keep any sort of form. Going into 2021, India is looking at a big test in Australia, England, and the T20 world cup on the horizon.

The Men In Blue will play 14 Test matches, 16 ODIs, and 23 T20s in 2021 and this is besides Asia Cup, ICC World Cup, and IPL. In pure numbers, it is 109 days of cricket and 60 days of IPL excluding major tournaments, that is over 1 match in every 3 days! Let’s take a look at some of the big test series this year.

INDIA TOUR DOWN UNDER

India’s series in Australia is halfway through, 2 tests remaining and the series is poised at 1-1. Praises have been coming in for Team India for performing against the odds of injuries and players missing in action. A win in this series will do a big deal in India putting up sustained pressure in Test Championship to overcome Australia.

Four Tests, 4 ODIs & 4 T20s and a chance to give it back to the reigning ODI world champions at home. When India visited England for the 4-test series, men in blue was humbled to a 3-1 defeat. But England has not a test in India for 7 years after the series win in 2012-13 campaign. India is also on 10 match winning streak in the longest format of the game at home. Add to the 1st ever test match at the biggest cricket stadium in the world and cricket fans are licking their lips.

7 cups in 14 tournaments and also a chance to make it 3 out of 3 for the Men in Blue. India have won it in the last 2 editions in Bangladesh and UAE, this time it is in Sri Lanka. No team has ever been able to make a hattrick of Asia Cups ever, a chance for Kohli and Co to change that. 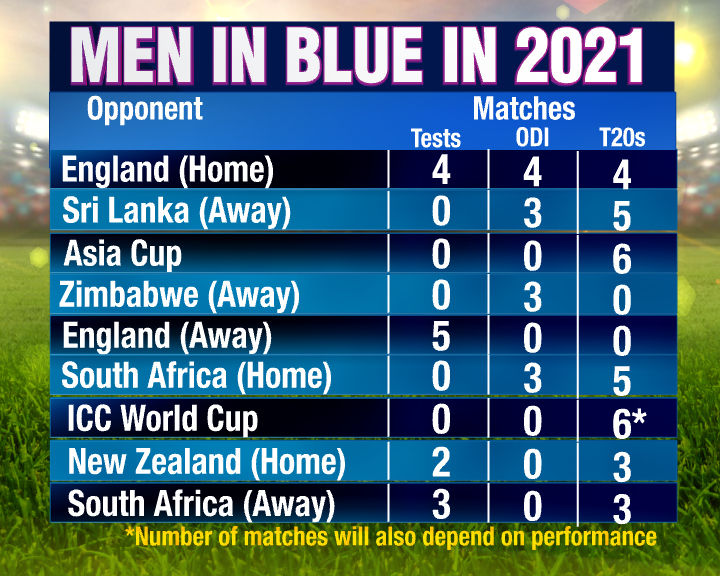 After hosting England in January and February India will go to England in August to fight in another overseas series. 5 test series and India is yet to win a series in England in 13 years and while India have had their test victories here and there, if Virat Kohli and co is able to win this series, it will make him one of the legendary captains along with Rahul Dravid & Saurav Ganguly. Even MS Dhoni has not been able to win a series in England, so, it will be a big opportunity for the new look Team India.

The big tournament of this year in world cricket. World T20 will be in India in October-November. India is yet to win a major ICC trophy since the 2013 ICC Champions Trophy. India have been faltering in the last stages of the competition in recent times. Semifinal in the last 2 ICC ODI world cup, 1 ICC Champions Trophy Final, and a final & semifinal in World T20s. It is time for Team India to break the jinx and what better opportunity to do that than at home this year!