You didn’t need to know a Cover 2 from a cover girl to know just how pathetic the Cowboys’ defense was last season. A well-done steak offered more resistance. And while you have to wonder about a scheme in which even Sean Lee occasionally looked lost, it’s safe to say a lack of talent appeared to be the chief reason for the general state of confusion.

So if one of the cornerbacks, Patrick Surtain II or Jaycee Horn, is available when the Cowboys are on the clock with the 10th pick, it’s a no-brainer, right?

Not if Kyle Pitts is still hanging around. Or a quarterback someone might want.

Never get so consumed by your obvious needs that you lock yourself out of intriguing possibilities.

Or as Jerry Jones put it, stealing our usual advice for the general manager, “Don’t be ridiculous.”

The idea in the NFL draft, the most fruitful of any sport, is to accumulate the best talent available. And if it happens to coincide with your needs, all the better. Of course, some of you will say that’s all the more reason they should draft a quarterback if Justin Fields or Trey Lance or Mac Jones falls in their lap. Even if you really believe that, Jerry’s got too much invested in Dak Prescott to double down on another expensive quarterback proposition. Probably the same reason Atlanta won’t take a quarterback with the fourth pick, given that the Falcons just spread Matt Ryan’s gargantuan salary cap hit over the next three seasons.

Also one of the reasons that Atlanta is considered a destination for Pitts, the uber-talented tight end out of Florida. He might be the best player in this draft. But what if a team in need of a quarterback – say, New England or Washington – offered to trade up with the Falcons?

Pitts could easily slide to 10. At five, Cincinnati must decide between protecting Joe Burrow with Penei Sewell or reunite him with Ja’Marr Chase. Miami could take what the Bengals don’t. Detroit has been linked to the draft’s best linebacker, Micah Parsons, and if not him, one of the wide receivers.

Does Carolina want another quarterback in case it turns out that what happened to Sam Darnold in New York wasn’t a fluke?

Does Denver want another quarterback at all, or do the Broncos take the first cornerback instead?

Great athletes who don’t play pivotal positions sometimes slide out of the top 10 for the reason mentioned above. Teams get tunnel vision about needs in critical areas. Look what happened in 2018. Derwin James, a safety, was considered a top 10 value but fell all the way to the Chargers at 17 because only two or three teams ahead of the Chargers were in need of a safety. So it’s not just the Cowboys, in other words.

Speaking of which: Remember when I told you the Cowboys should have traded up a couple spots in ’18 to take James, who’s become one of the best do-it-all talents in the league, instead of waiting on Leighton Vander Esch? You don’t? Clearly you need to be saving this stuff.

No, the Cowboys shouldn’t trade up this time. Not at 10. If Pitts is there, he’d be a terrific choice, fixing a problem by giving the Cowboys one of the best offenses outside Kansas City. They’d simply outscore their problems on defense. His presence would also mitigate the potential loss of either Amari Cooper or Michael Gallup in 2022.

But if Pitts is gone and one of the quarterbacks is still available, the Cowboys have options. They could trade down, though not much further than the Patriots at 15. They’d probably still have a shot there at Surtain or Horn. Certainly Caleb Farley, once considered the best cornerback prospect in the class before back surgery. Farley’s bad luck continued with Tuesday’s news that he tested positive for COVID and therefore had to decline the NFL’s invitation to attend the draft. On second thought, maybe Farley’s black cloud is a warning.

New England may also be waiting for San Francisco to take a quarterback with the third pick and put Jimmy Garoppolo on the market, in which case he could be reunited with his former head coach.

But someone will be interested in one of the top five quarterbacks at 10. Jerry needs to give out his number, just in case.

And if Pitts or a quarterback isn’t there when the Cowboys are on the clock? Then they should probably decide between Surtain or Horn. They’re both about the right value at 10 and the cream of the defensive crop.

The question is whether you prefer the sure thing in Surtain, who has no holes in his game, or you like your cornerbacks to come with an edge, as Horn does. The bigger the chip on the shoulder, the better the corner. Like the lovely wife says, almost constantly, you’ve always got to prove yourself. 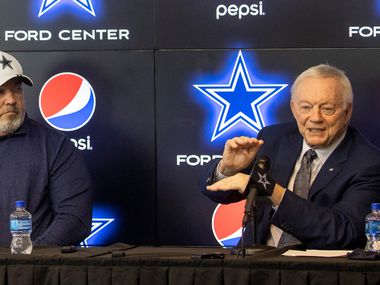