James van Riemsdyk had heard the horror stories. About the blowouts. About how revolting the situation can get. About how one mistake could leave you with an absolute mess on your hands.

But to his surprise, he’s actually pretty good at changing a diaper.

James and Lauren van Riemsdyk welcomed daughter Scarlett Everly to the world on May 2, 2020. He had nearly three months with his newborn before shipping off to the NHL postseason bubble in Toronto, where the Flyers played through Sept. 5 before losing to the New York Islanders in the conference semifinals. He missed his family, although it also meant he missed some growing pains.

“My wife was telling me that when we were in the bubble, and [Scarlett] was between 2 and 4 months old, she wasn’t sleeping very well. She had to be rocked to sleep whether it was a nap or to go to sleep for the night,” van Riemsdyk told ESPN. “We started her on sleep training about three days after I got back from the bubble, and now she sleeps like a champ through the night. And my wife is like, ‘Of course, the minute you get home, she figures out how to sleep.'”

In his first NHL regular season as a father, van Riemsdyk’s days away from the rink are spent “on the clock” with Scarlett. Which is fine by him. “When you go home and get time to spend with your child, as new parents, that can be a great thing. A lot of fun. Something to take your mind off of ‘hockey, hockey, hockey’ all the time. It’s a good balance for me to have. This has allowed me to have more of that balance in my life,” he said.

Becoming a parent inevitably makes one acknowledge the passage of time. But for an NHL player there’s “real life age” and “hockey age.” In life, having a child at 31 years old doesn’t make you ancient. In hockey, having your 20-year-old linemate define you as the old guy sorta does.

“He’s an older guy. He leads by example. He’s playing really well for us, and I really enjoy playing on a line with him. I think we have good chemistry,” said Flyers winger Joel Farabee, who was 7 years old when his teammate van Riemsdyk was drafted in 2007.

“I’m a dinosaur nowadays,” van Riemsdyk said with a laugh. “I definitely don’t feel old. But it’s amazing how things shift during your career.”

There have been three major shifts in the context of van Riemsdyk’s career. The first was being drafted by Philadelphia, where he played his first three NHL seasons, beginning in 2009-10. Then the Flyers traded him to the Toronto Maple Leafs in 2012 for defenseman Luke Schenn. He spent the next six seasons with the Leafs, putting up the best offensive numbers of his career (154 goals in 413 games) and bridging the franchise’s transition from the team of star Phil Kessel and GM Brian Burke to the team of star Auston Matthews and GM Kyle Dubas.

He left Toronto as a free agent in 2018 and ended up in an unexpected place: Back with the Flyers, who signed him to a five-year, $35 million contract.

The plucky rookie of 2009 had become the big-ticket free agent in 2018. In a town like Philadelphia, that can change expectations, especially when that free agent’s impact isn’t obvious or immediate. He had 48 points in 66 games in 2018-19. He had 40 points in 66 games last season. Fan blogs started wondering why he had disappeared. His postseason was called “an unmitigated disaster,” as he scored two goals in 12 appearances, and was scratched for three playoff games.

Has he been happy with his second stint in Philadelphia?

“I’m trying to come up with the one word that would describe it,” he said. “There’s been some craziness. This is my third year here now, and I’ve already played for three head coaches and two general managers. So it wasn’t exactly how you envision it. But ultimately in the world of sports, we know these things are possibilities and you just go from there.”

Dave Hakstol was fired 31 games into van Riemsdyk’s first season back with the Flyers. Scott Gordon took over on an interim basis. Alain Vigneault has coached the Flyers for the past two seasons. Meanwhile, the general manager who signed van Riemsdyk — Ron Hextall — was shuffled off for Chuck Fletcher in November 2018.

“When you have new coaches and new management, particularly when you’re ‘inherited’ in certain situations, there always is a process of finding that comfortability and finding that fit. I feel like over the course of my time here, I feel like I’ve played good hockey. Last year, I was a little snakebit at times,” said van Riemsdyk. “But my process was pretty strong. This year, it’s felt good to be able to chip in and get rewarded on the scoresheet. Obviously the team has had some good success winning games. So it’s always fun to contribute winning efforts.”

The Flyers are off to an 8-3-2 start and van Riemsdyk is their leading scorer, with 18 points in 13 games. Much of the credit for that start goes to the line of van Riemsdyk, Farabee and Scott Laughton, who are scoring at an incredible rate of 8.6 goals per 60 minutes of 5-on-5 ice time.

“They’ve been, without a doubt, our most efficient line,” Vigneault said after Philadelphia’s win over Washington on Sunday. “I think a lot of that has to do with how James is playing; he’s playing the right way. He’s playing the right way defensively, when he’s on the forecheck. He’s got a great stick and he’s creating turnovers. He’s been a force for us and that whole line has developed some chemistry.”

When van Riemsdyk saw Farabee last season as a 19-year-old rookie, he knew it would just take a little growth physically and professionally for him to blossom in the NHL.

“When he first came up last year in training camp, you could just tell the IQ he has as a player was already at a really high level. It was just going to take finding that comfortability with professional hockey before things were really going to take off. He’s obviously gotten a bit more of an opportunity this year to play in some bigger roles for us. He’s definitely held up his end of the bargain,” said van Riemsdyk.

So has van Riemsdyk, who is enjoying the most sustained success he’s had in his return to Philadelphia. What’s the difference between “an unmitigated disaster” one season, and being the leading scorer on your team with about a quarter of the next season over?

Some have speculated that fatherhood has helped his focus. His coach isn’t necessarily buying that theory.

“One of the greatest moments that you can have is to become a father. To see your child grow. To see your faults and your positiveness in your kid, doing a lot of the same things that you do. For him, or for anyone, it’s a great moment,” Vigneault told ESPN. “But I’m not sure that has anything to do with him playing the way he is. I tend to believe he’s playing the way he is right now because he’s playing the right way. He was able to analyze his last season. Come to camp with a fresh mind and a clean slate.”

Van Riemsdyk agrees that his physical and mental preparation for the season was important. But while he’s not “one of those people who don’t step on any cracks when I’m walking to the rink,” he also acknowledges that the paranormal concept of “puck luck” has contributed to his hot start — when the bounces just simply go your way.

Can a player feel when that “puck luck” changes for the worse? When the luck runs out, or isn’t there?

“I don’t know. I’ve actually never thought about it the other way. I guess I’m just an optimist or whatever,” he said, laughing.

While he cites other factors, van Riemsdyk believes he did experience that dreaded “bad puck luck” last season.

“Not to dwell too much on last year, but the start of my season, I felt I was doing a lot of good things but nothing was going in,” he said. “My game was in a good place. We were snapping the puck around on the power play, I felt like I was contributing at 5-on-5 and nothing was going in. So it’s just funny how it works. This year, I get a goal in the first game and you feel like you can get on a little bit of a roll and a run from there. I’m just trying to ride that out.”

Van Riemsdyk has seen streaks come and go. He has seen his luck shift as quickly as perceptions have. He has been a hockey player with free time one minute and then a father beholden to his child’s schedule the next. The changes come quickly. Life moves fast.

“It’s always the cliché when you start your career: People telling you to just make sure you enjoy it, because it flies by,” he said. “And you’re like, ‘OK, whatever. I’m like 20 years old. I’m never going to be 31 years old,’ or however old the guys who were telling me that at the time were. And then here you are, sitting in their shoes, and yeah, it does seem to fly by. But it’s been an awesome journey.”

WTC points table update: Is the Edgbaston Test a must-win for India?

Serena Williams is out of Wimbledon, but it was an epic, incredible match against Harmony Tan

WTC points table update: Is the Edgbaston Test a must-win for India?

Serena Williams is out of Wimbledon, but it was an epic, incredible match against Harmony Tan

Ron DeSantis: Florida's governor was spotted mask-less at the Super Bowl. His reason is, uh, not great. 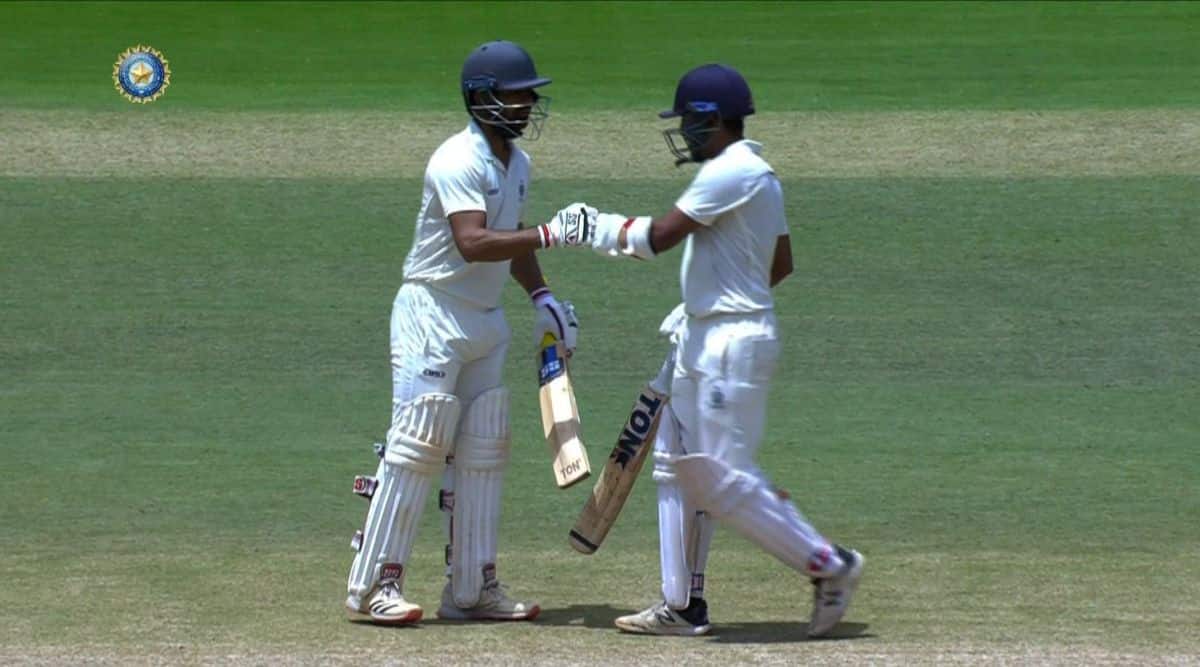