Formula 1 drivers and team figures have played down the prospect of the Sakhir Grand Prix delivering the chaotic overtaking-fest that some have hoped for.

While predictions ahead of the weekend pointed to a troubled qualifying session with cars tripping over each other on the short outer loop layout, all three sessions on Saturday passed without trouble.

And early indications from practice running also suggest that overtaking in the race will not be as easy as originally thought, with the upper chicane section of track likely to spread cars apart.

McLaren’s Carlos Sainz Jr said that while passing other cars will not be impossible – especially on the regular sections of track – it was not going to be straightforward.

“It’s not as easy to overtake as people think,” he said. “I think we saw a pretty exciting F2 race, but F2 races are always exciting for us.

“It looks very tricky to follow around sector 2, because of the chicane. It doesn’t allow you really to follow the car in front very well. So it’s not as easy as maybe the track layout suggests to overtake.”

One issue that could become important though is the impact of car damage on performance, with bargeboards, floors and driveshafts having taken a battering from the kerbs this weekend.

“The kerbs out the back in Turns 7/8/9 are quite aggressive,” said Lando Noorris, who believes that 87 laps of abuse will make things interesting. “If you hit them wrong or with the wrong angle or something, they can damage your car.

“I don’t think it is too different to some other weekends, as some tracks have similar things. But I think just the sheer volume of laps that we do: we do two laps here for every one lap of a normal track.

“So things happen a bit more regularly. I’m sure there’s going to be some things to look after and make sure you’re still there at the end of the race to score points.”

The long straights and lack of corners on the outer loop layout are likely to limit the chances of drivers being able to pull a gap to the car behind, and there is a high chance of a DRS trains being formed – as cars pull each other along.

For Williams, which is chasing its first points of the F1 season, chaotic events would be welcome so it could capitalise on other cars hitting trouble.

However, its head of vehicle performance Dave Robson is sceptical about things becoming too out of the ordinary. 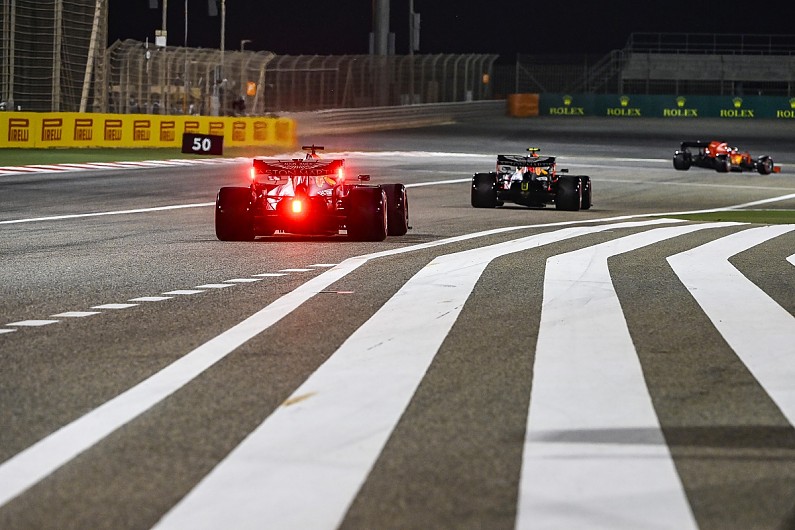 “I hope it’s going to be a bit chaotic with a high attrition rate as that will help us enormously,” he said.

“But I thought Q1 would be more chaotic than it was. And I think probably the fact that the tyres would generally only do one lap, meant that people had plenty of time to thread their way around the race.

“The race could be interesting. I think that it will be quite close and quite tightly bunched up, so potentially if there’s one incident, it might affect more cars than normal.

“The attrition has been interesting. We did some of those corners a few years ago here, we knew it was bumpy, and it still is, and some of the kerbs are pretty big at turn seven and eight and a slightly different shape to normal.

“So, will it be chaotic? I suspect not. But, fingers crossed! I think it will sadly turn into a fairly normal F1 race.

“And the worst thing for us is that the leaders will catch us more quickly and we will have to deal with more blue flags. Otherwise I think it will be fairly standard.”

Autosport has produced a standalone special magazine to celebrate our 70th birthday. All current print subscribers will receive a copy for free. To order your copy of the 196-page Autosport 70th Anniversary issue, please go to: autosport.com/autosport70th

Knaff comes full circle — and then some