It’s been the year of Clay Collard, one that may be coming to an end this Saturday in Las Vegas.

That’s sad news for the fans who took to the story of the mixed martial artist who made a full time return to boxing in 2020 and rapidly became a prospect killer of the highest order, going 5-0 over an array of foes that had a combined 32-4 record.

But business is business, and Collard will be wearing four-ounce gloves in mixed martial arts bouts when the Professional Fighters League (PFL) season kicks off in the spring of next year.

“I think once April starts, I’m gonna be pretty booked up for the year,” said Collard. “I got a whole year of MMA fights to go and I’m gonna go win this belt, so I’m gonna switch my focus over to mixed martial arts for that year and see what happens and then go from there.”

Allowed to switch over to boxing full-time while the PFL went on pause in 2020 due to the COVID-19 pandemic, Collard could end up with a million-dollar paycheck should he win the promotion’s lightweight tournament, and that’s more than enough incentive to put boxing on the backburner. But as he makes clear, his love affair with MMA never waned.

“I’ll never quit MMA training,” he said. “And I never stopped. When it comes closer to a boxing match, I kinda lay off it a little bit, but I’ve never stopped training mixed martial arts.”

And he does admit that he misses the sport where he’s compiled an 18-8 record, sometimes even during a boxing match.

“Some guys will give me angles where it’s like, ‘Man, if I could kick you, you wouldn’t be able to walk after the first round,’” he laughs. “I’m excited to get back to it and see what I can do.”

When he does go back to the cage, Collard will do so as a cult hero whose story captivated the boxing world as he took advantage of any opportunity that came his way in 2020. That’s been Collard’s M.O. since he started fighting, and while a four-fight UFC stint in 2014-2015 didn’t work out, the Utah native made an impression as he faced future featherweight champion Max Holloway, beat Alex White, and went three rounds with Gabriel Benitez, who picked up a Performance of the Night bonus for a knockout win last Saturday. 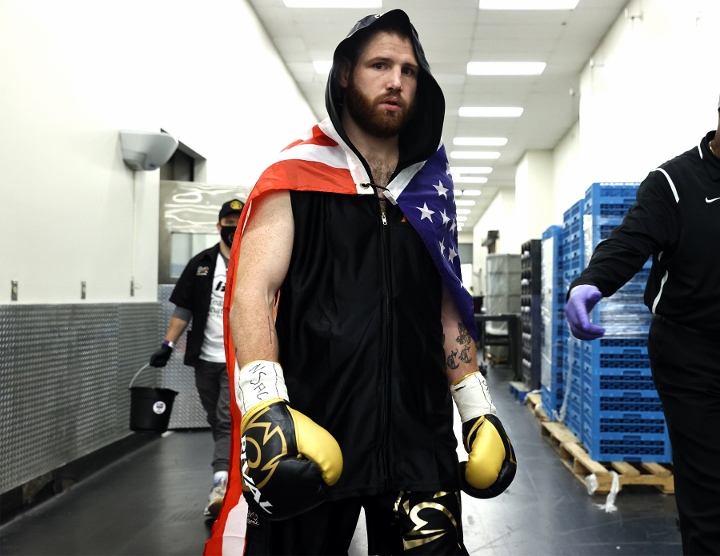 Two years after being released by the UFC, Collard made his pro boxing debut, and though he went back to MMA in 2018 and went 4-1, by 2019, he was putting much of his time into the sweet science, going 3-2-3, with his only losses coming against top prospects Quinton Randall and Bektemir Melikuziev. One of the draws was against Quincy LaVallais in June 2019, and Collard thought he had seen the last of the unbeaten Louisiana native, but they will meet again this Saturday in Las Vegas.

“You know, I thought I won the first fight, first off,” said Collard. “After that, I was looking to the future. I was looking for the next guy.”

In 2020, those next guys included 9-0 Quashawn Toler, 5-0 Raymond Guajardo, 6-0 David Kaminsky, and 7-1 Maurice Williams. The results? Collard W6, TKO2, W6 and TKO2, respectively. In the midst of a pandemic, Collard became the fighter everyone cared about and wanted to see. LaVallais wanted to punch him in the face again.

“I started making a name for myself and beating these top prospects and climbing up the ladder and then he called me out,” said Collard. “So I think he’s trying to jump on the hype train a little bit.”

He wants in on the Cassius Clay bandwagon?

“He’s jumping on the bandwagon,” Collard laughs. “He wants a piece of me. But I think it’s a mistake. I think I had him beat the first time and I’ve gotten so much better since then, in my opinion. I was still getting back into the whole swing of boxing the first time we fought. Now I’ve been doing it and it’s second nature to me again. So I think it’s gonna be a bad night for him.”

And with a win, it will be a good night for the fans who have taken him in. Then, all they can hope for is that Collard will be able to sprinkle some boxing in among his MMA fights. That sounds like a good plan for the 27-year-old, who appreciates the support he’s gotten in a year he will never forget.

“I describe this year as wonderful,” he said. “It has been a great year for me. I came out of nowhere. I think people kind of forgot about me after being cut from the UFC and I was on the local circuit, and I think everybody kinda wrote me off. And here I come choo-chooing, and the Collard train is back at it. (Laughs) I think that’s why people care. I came out of nowhere and I started surprising people and beating top prospects and I just don’t think anybody saw it coming.”

PFL 1 — Once again, Clay Collard is off to an impressive start – ESPN

PFL 1 — Once again, Clay Collard is off to an impressive start – ESPN

‘You deserve it’: Hardik Pandya, Team India hand over awards to T Natarajan