When the 1994-95 Big West Women’s Basketball Preseason Poll came out, UC Irvine was an afterthought, picked to finish ninth in a league comprised of 10 teams.

The Anteaters had won 12 games over the course of the previous three seasons and made the Big West Tournament only once during that stretch. Despite their past records and the preseason projections, the ‘Eaters knew they had a special group that was ready to shock the conference.

“It was a special group because we had great leadership and everyone seemed to vibe with each other,” said Colleen Matsuhara, who claimed UCI’s only Big West Women’s Basketball Coach of the Year award in 1995. “They were true student-athletes.”

“We were a tight-knit group and had great team camaraderie; many of us are still very close friends to this day,” added former All-American Allah-mi Basheer. “Our starting five was solid, our bench was amazing and we all respected each other’s contributions no matter how big or small. We also wanted to win. Coach Matsuhara did an excellent job preparing us both on and off the court. We were in great physical shape, we had worked hard, we were hungry and we wanted to eat!”


All of that hard work paid off as UC Irvine finished Big West play with a 12-6 record, marking the most regular-season conference wins in program history. Feeling confident, but aware of the tough road ahead, the Anteaters made their way to the Thomas & Mack Center in Las Vegas as the No. 3 seed in the Big West Tournament.

“Our mentality was to enter each game thinking that our chances to be successful were good if we executed our game plan,” said Matsuhara.

The ‘Eaters started their postseason run in the second round against fifth-seeded Long Beach State on March 8, 1995. It was a close game early on with UCI trailing by two at the half, but the Anteaters went on to outscore the Beach, 44-31, over the final 20 minutes for the 71-60 victory. Basheer led the way with a double-double, registering 18 points and 11 rebounds.

The following day, UC Irvine was pitted against No. 7 seed Cal State Fullerton, which was coming off a quarterfinal upset win over No. 2 UC Santa Barbara. The Anteaters, who defeated the Titans twice during the regular season, made it three in a row thanks to a buzzer beater from Basheer.

With two seconds on the clock, Basheer provided the heroics as her 10-foot jumper rattled in, giving the ‘Eaters a 69-67 victory and propelling them to the Big West championship game for the first time since 1985. Basheer had her second-straight double-double with 14 points and a game-high 12 rebounds. Jinelle Williams also scored a game-high 19 points.

“I just remember feeling really loose and like I didn’t have to work too hard to execute,” Basheer recalled. “I guess it was one of those moments where I let the game come to me. My shots felt effortless. I was committed to doing everything in my power, but Fullerton battled hard. When I hit that shot, all I remember is the roar of the crowd and how excited we all were.”

After enjoying the moment, Basheer and her teammates turned their focus to the finals where No. 3 UC Irvine was set to take on No. 4 Pacific (March 11, 1995). The Tigers had reached the championship with wins over No. 6 UNLV and top-seeded New Mexico State. Although UCI was the higher seed, UOP might have felt like it had the edge as it had won the two regular-season match-ups and hadn’t lost to the Anteaters in the teams’ last 13 meetings.

The championship game started as a back-and-forth affair with four lead changes and three tie scores over the first 20 minutes. Pacific took the largest lead of the first half at 18-13 with 5:10 remaining. Cher Scanlon then knocked down a 3-pointer to start an 8-2 run that put the ‘Eaters up 21-20 at the break.

UC Irvine stayed out front early in the second frame before the Tigers reclaimed the advantage with 13:28 on the clock. After trading buckets, it was UCI that strung together a 7-0 rally to pull ahead for good. Sparked by a strong performance at the free throw line (28-of-37), the Anteaters went up by as many as 14 before Tamera Thomas was eventually able to dribble the clock out in a 65-53 victory that gave the program its first and only Big West Tournament title to date.

“It was pretty unbelievable and exciting to know we were going to the big dance,” said Matsuhara. “I was happy for my coaching staff and the players, especially the ones who were part of our very first recruiting class like Allah-mi Basheer, Fatima Warren, Davette Williams and Tamera Thomas, who took the chance to come to UCI wanting to build the program. It was a memorable achievement and a first for UC Irvine women’s basketball.”

Thomas, who was 10-for-13 at the foul line, led four ‘Eaters in double figures with 17 points. Jinelle Williams also had 14 points, while Scanlon finished with 12. Basheer added 11 points and eight rebounds.

Basheer was named the Big West Tournament MVP, and Williams was also selected to the six-person all-tournament team. The Anteaters finished the historic campaign with a 19-11 overall record, more than doubling their win total from each of the previous six seasons. 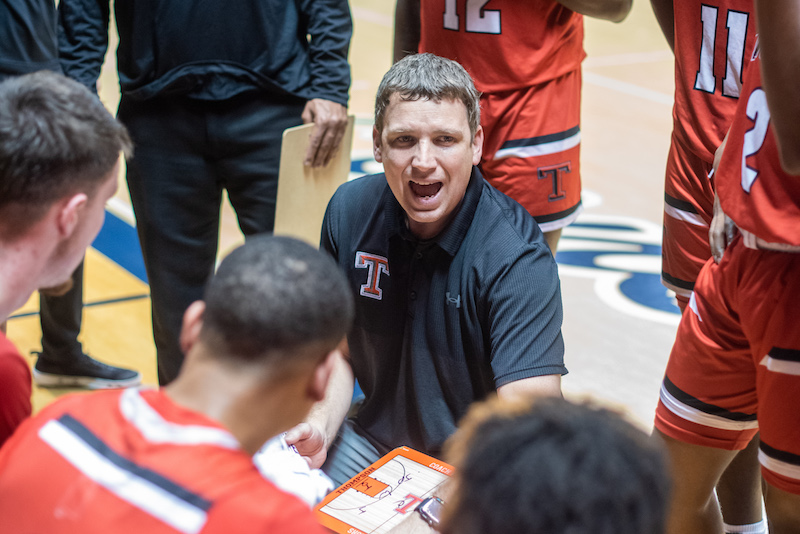