The Alabama Crimson Tide overwhelmed the Ohio State Buckeyes 52-24 to win yet another national championship under coach Nick Saban in the College Football Playoff finale on Monday night, and to the surprise of very few, Bama is favored to repeat.

With all the quarterbacks for those teams bound for the 2021 NFL Draft, including probable No. 1 overall pick Trevor Lawrence, the national title picture still looks largely the same on the NCAA football gridiron in 2022. Let’s look more closely at the heavy favorites from their initial listings.

(Check out the odds on BetOnline.ag)

It’s all about reloading each year for Saban and Co. in Tuscaloosa. Thus far, he’s won six of his seven national championships at Alabama, and in more recent years, he is recruiting the quarterback position far better than he ever had before.

Saban got by with mostly game manager signal-callers. Lately, he’s had the likes of Tua Tagovailoa and Mac Jones, who’ve both been historically efficient throwers of the football. While Tagovailoa stepped in as a true freshman and sparked a comeback in the CFP finale versus Georgia, Jones embraced being Tua’s successor and put up even better numbers.

There’s little doubt the Crimson Tide defense will still be elite in Saban’s system, yet the muddled play-calling situation on offense creates less certainty on that side of the ball. Oddsmakers don’t seem to care, because Saban always seems to find a way to reign supreme in the nation’s toughest conference, the SEC.

Because 2020 five-star recruit Bryce Young may be the best talent Saban has ever landed at the quarterback position, though, the dynamic, dual-threat QB’s skill set may be enough to overcome any offensive execution issues and keep the Tide rolling this next season. 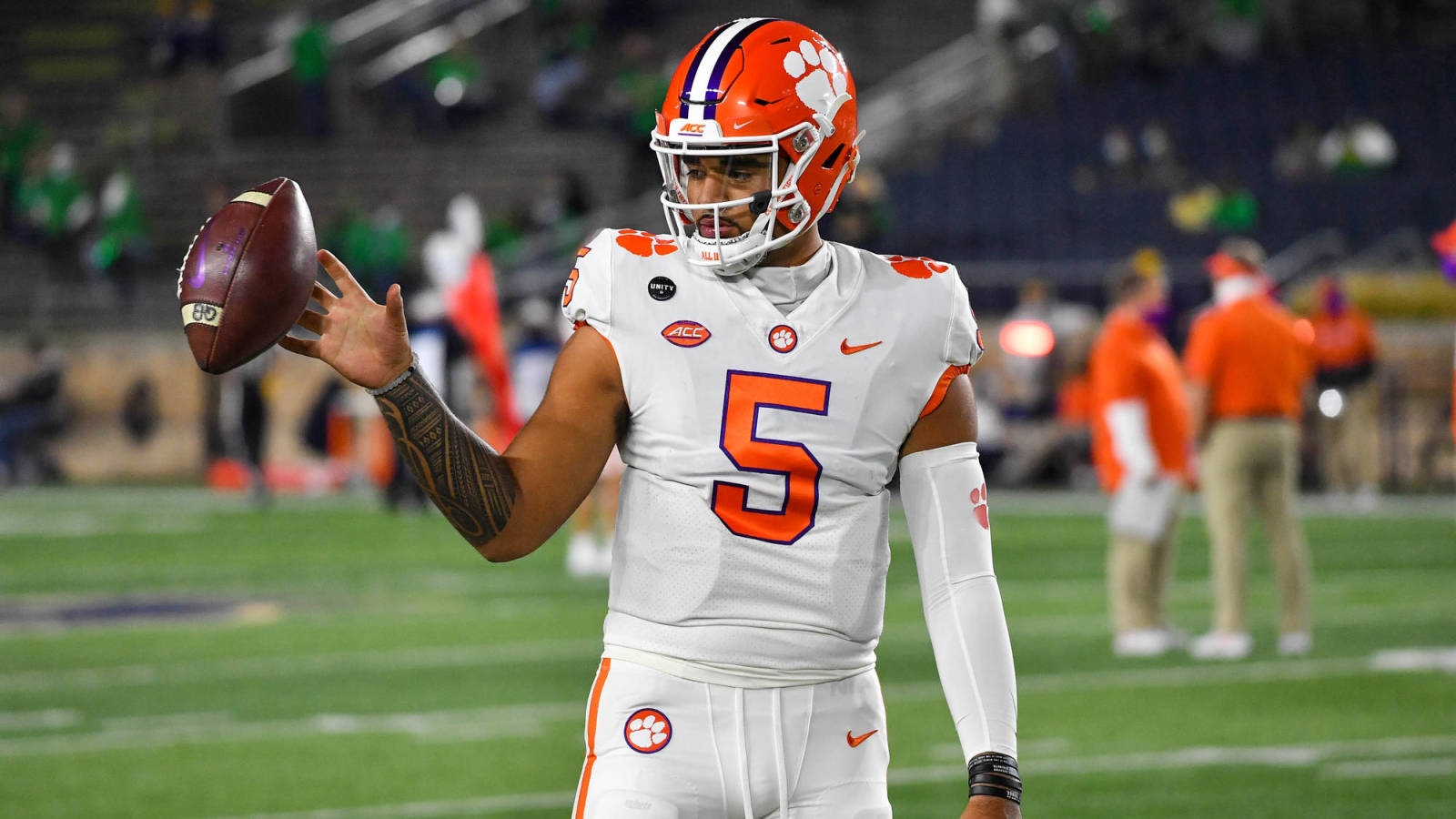 When Lawrence was forced out of the lineup due to COVID-19, D.J. Uiagalelei, a 6-foot-4, 250-pound freshman, calmly stepped into Lawrence’s shoes and performed extremely well in two starts. A 47-40 loss to Notre Dame in double-overtime couldn’t be pinned on him, as the defense obviously had issues stopping the Fighting Irish.

Uiagalelei provides hope that the Tigers can enjoy sustained excellence at the position and not suffer a relative lapse with Lawrence handing the torch off. There was a one-year lull between the Deshaun Watson era and when Lawrence eventually took over to win Clemson a national title as a true freshman.

The defense was hurting without do-it-all Isaiah Simmons, who was a top-10 NFL Draft pick, and cornerback A.J. Terrell, whom the Atlanta Falcons also made a Day 1 draft choice in 2020. With more returning experience next season and better continuity overall, Clemson’s D should take a big leap.

Losing running back Travis Etienne to the NFL is going to hurt the offense in a big way. However, Uiagalelei managed to throw for 439 yards against Notre Dame even when Etienne was bottled up and managed only 28 yards on 18 carries. Still being able to air it out so effectively in a one-dimensional offense proves Uiagalelei has the stuff to succeed Lawrence and keep Clemson in its accustomed perch atop the ACC. 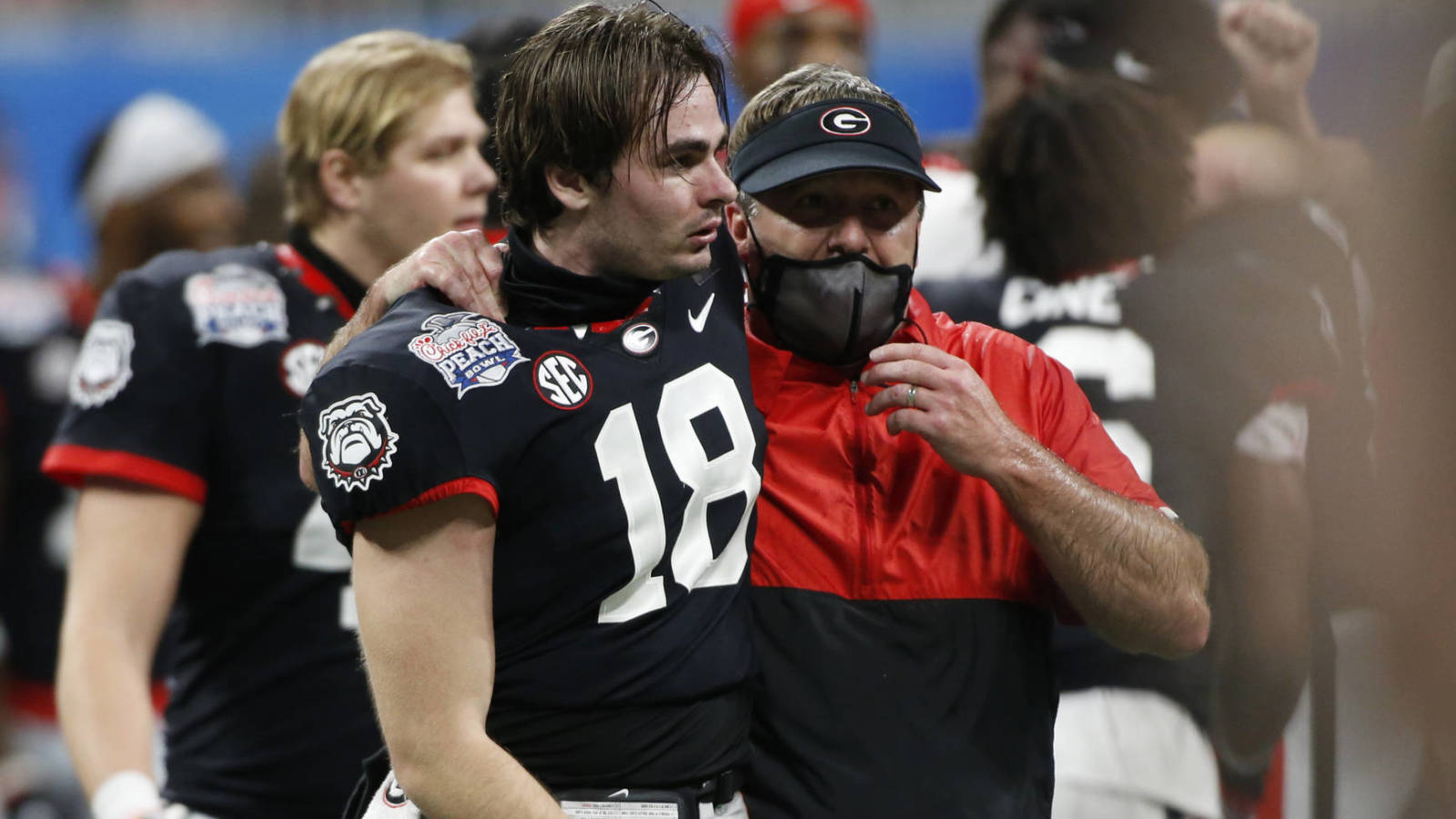 Head coach Kirby Smart is impressively keeping up with Alabama in the SEC on the recruiting front, bringing in the No. 3 class, according to 247Sports’ rankings, after having the top-ranked 2020 crop of prospects in the country.

All this suggests the Bulldogs will have the depth to withstand injuries and some star power coming from their vaunted 2020 class. The question is, how quickly can these new contributors catch on in order for the Bulldogs to challenge the Tide for SEC supremacy?

One big question mark is the quarterback position. JT Daniels played well down the stretch, yet he’ll have competition in 2021 at least with Carson Beck. Georgia’s most prized incoming recruit, dual-threat five-star signal-caller Brock Vandagriff, recently had surgery to repair a torn PCL in his knee. As long as Vandagriff recovers in time for fall camp, he’ll likely push for the job as well.

It’s a good problem to have, several enticing options at the most important position. Smart will need to be wise in how he deals with the potential controversy. If Daniels’ experience gets him the nod and he struggles at all out of the gates, you can expect fans in Athens to be clamoring for Vandagriff to get the gig. Georgia is a risky bet compared to some of the other favorites on this list. 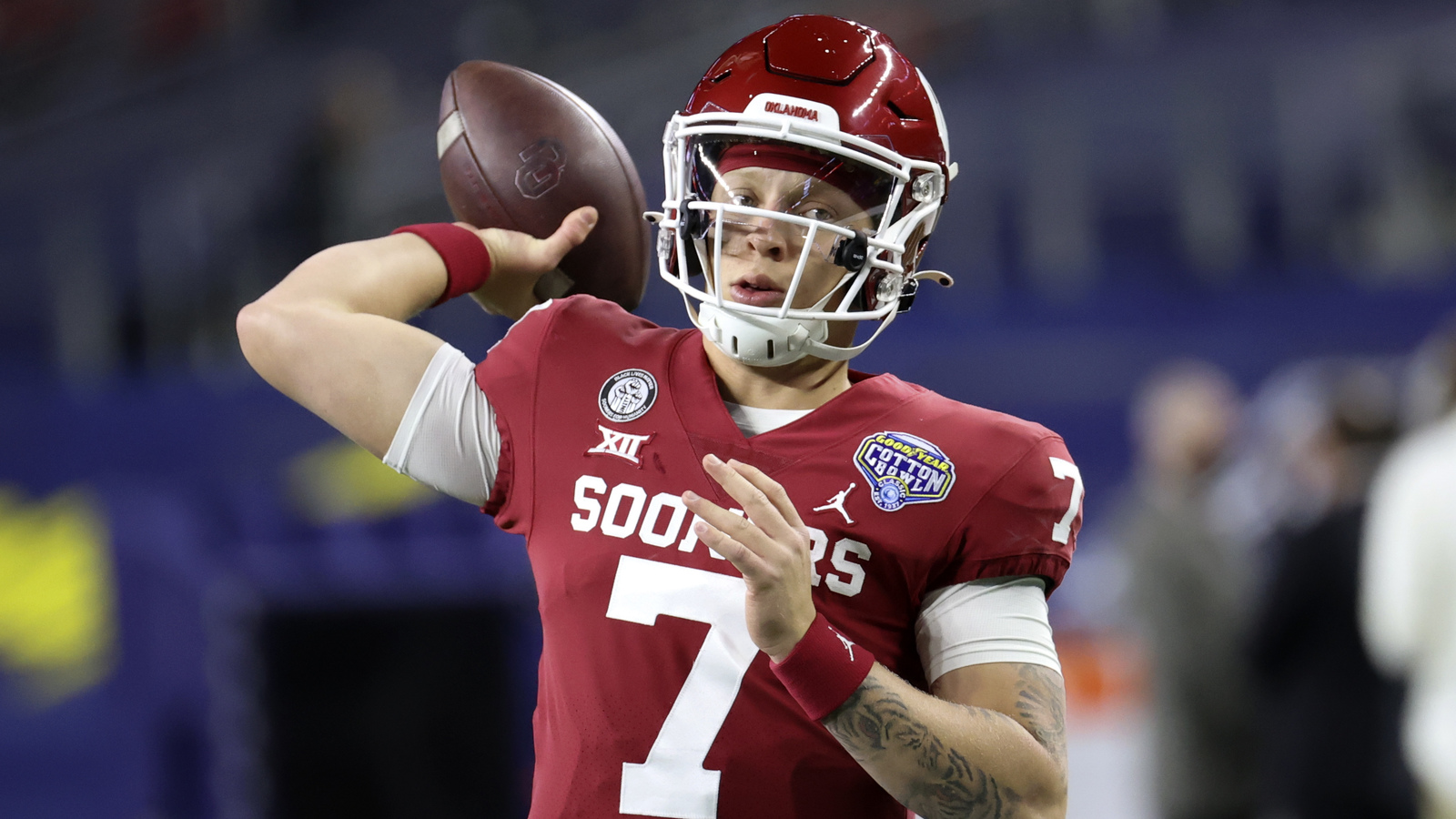 Between a markedly improved 2020 defense and the continued development of rising sophomore quarterback Spencer Rattler, Sooners fans have so much to be optimistic about next season. They’re probably the best betting value among the College Football Playoff 2022 national championship contenders.

Oklahoma coach Lincoln Riley has to be the best offensive mind in college football. As long as he spurns the NFL once again, he’ll be back in Norman, and so will Rattler. It’ll mark the first time in four years Riley has had the same signal-caller running the Sooners’ show, as he’s adjusted to one-year transfers Kyler Murray and Jalen Hurts previously. They turned out pretty well.

Rattler has such a high ceiling and is only beginning to realize his potential. Provided he has a typical, full offseason to digest the playbook, improve his football acumen and collaborate with Riley on even more dynamic play designs, Rattler is bound to be among the biggest Heisman Trophy contenders.

Defensive coordinator Alex Grinch will welcome back plenty of key contributors to his unit that improved a lot during his second season at the helm. Combine that with Rattler’s continuing rise, and Oklahoma is a prohibitive Big 12 favorite and should have little issue navigating its way to the College Football Playoff — potentially with a perfect record. 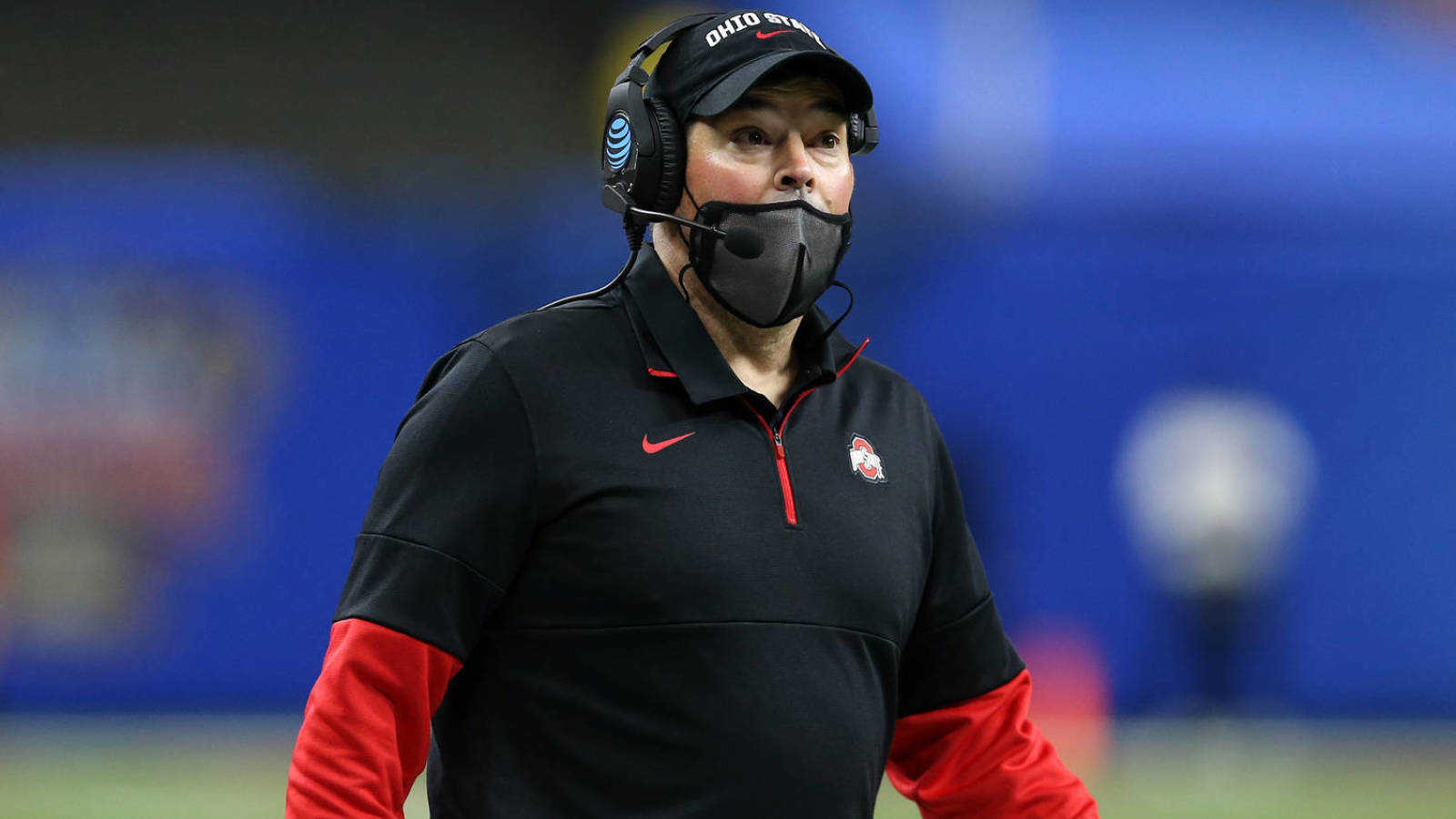 The offense will lose quarterback Justin Fields, running backs Master Teague III and Trey Sermon, and top wideout Chris Olave to the NFL. What will head coach Ryan Day do? There’s also the defense to be concerned about, as the Buckeyes had no answer for Alabama. To be fair, no one really did this season, though.

“Generational talent” is a term that gets thrown around a lot, but it was really true when it came to Chase Young. Ohio State’s edge-rushing extraordinaire became a captain for the NFC East champion Washington Football Team in 2020, and his presence on the Bucks’ defense was sorely missing.

As long as the Buckeyes can stock up on D in 2021, they should be right in the mix for the Big Ten title and firmly in the CFP conversation. They’ll lose most of their key contributors at linebacker, yet that may be a blessing in disguise, because Ohio State’s players waiting in the wings are mostly upperclassmen who bring more collective speed to the group. Look for Dallas Gant to pick up the slack in particular.

True freshman Kyle McCord could be the trigger man for Day’s offense for the 2021 campaign, but he’ll have a few capable players to beat out, including probable favorites C.J. Stroud and Jack Miller.

Relative sureties at quarterback make Alabama, Clemson and Oklahoma better bets than Ohio State to win the national championship, and the latter two have a slightly easier conference schedule to endure.