Kedar Devdhar remained unbeaten on 99 against Maharashtra in the previous game and taking his wicket is not so easy for the bowlers and he was dismissed only once in this tournament.

The Elite C Group match of the Syed Mushtaq Ali Trophy 2021 will be played between Baroda and Gujarat at F.B Colony Ground, Vadodara.

The match is scheduled to start at 12:00 PM local time and IST on January 18th.

Baroda and Gujarat teams will face each other in the Elite C Group match of the Syed Mushtaq Ali Trophy 2021 on Monday. With 4 consecutive wins on the trot, Baroda are at the top of the Elite Group C standings with 16 points. To maintain their top spot they must win this match, if they do so they can almost guarantee their knock-out spot. They might miss their skipper Krunal Pandya who did a great job in the first 3 matches, but stand-in skipper Kedar Devdhar took all the responsibility and scored a brilliant knock of 99* against Maharashtra.

Meanwhile, Gujarat are just below Baroda in the Elite C Group standings with 12 points and having a net run-rate of 1.348. Having started their tournament campaign with two wins against Maharashtra and Uttarakhand, Gujarat has been put down the breaks for their winning streak by Himachal Pradesh in the next game, but it was just a matter of time for them as they won quite comfortably in a rain-affected match against Chhattisgarh. It will be a do or die match for them to stay alive in the competition. It will be interesting as two of the strong teams battle against each other.

It will be sunny in Vadodara, with the temperature ranging between 28 to 31 degrees Celsius and the humidity will be 54 percent. It is going to be a full match without any interruption from rain.

By looking at the previous matches played on this venue, looks like pretty much a good T20 surface with more advantage for the batters and it is expected to remain the same throughout the match hence chasing will be easy on this ground, whoever wins the toss should bowl first.

Stand-in skipper Kedar Devdhar is in exceptional form with the bat for Baroda, he has scored already 200 runs in 4 matches and dismissed only once in this tournament, he can be a great addition to your Dream11 fantasy team.

Lukman Meriwala has been impressive with his bowling, he is the leading wicket-taker for Baroda in the ongoing competition with 10 wickets in his name and he holds one of the best bowling figures of 5 for 8.

Ripal Patel is the leading run-scorer for Gujarat so far this competition, he managed to score 116 runs in 4 matches at an average of 38.66 with a tremendous strike rate of 175.75.

Arzan Nagwaswalla is the pick of the bowler for Gujarat, he has scalped 9 wickets in 4 matches at an economy of 7.6 with the best figures of 6 for 19.

Gujarat skipper Axar Patel with his tight bowling has not conceded too many runs in this tournament, he has picked up 2 wickets at an economy of 5.33 while with the bat he has scored 31 runs at a strike rate of 110.71.

Piyush Chawla is well known for his leg-breaks and googlies, he had picked 5 wickets in 4 matches at an economy of 5.53. He is expected to do well against Baroda.

Also Read ­– I am in a good zone and not worried about the IPL auction or something: Mohammed Azharuddeen 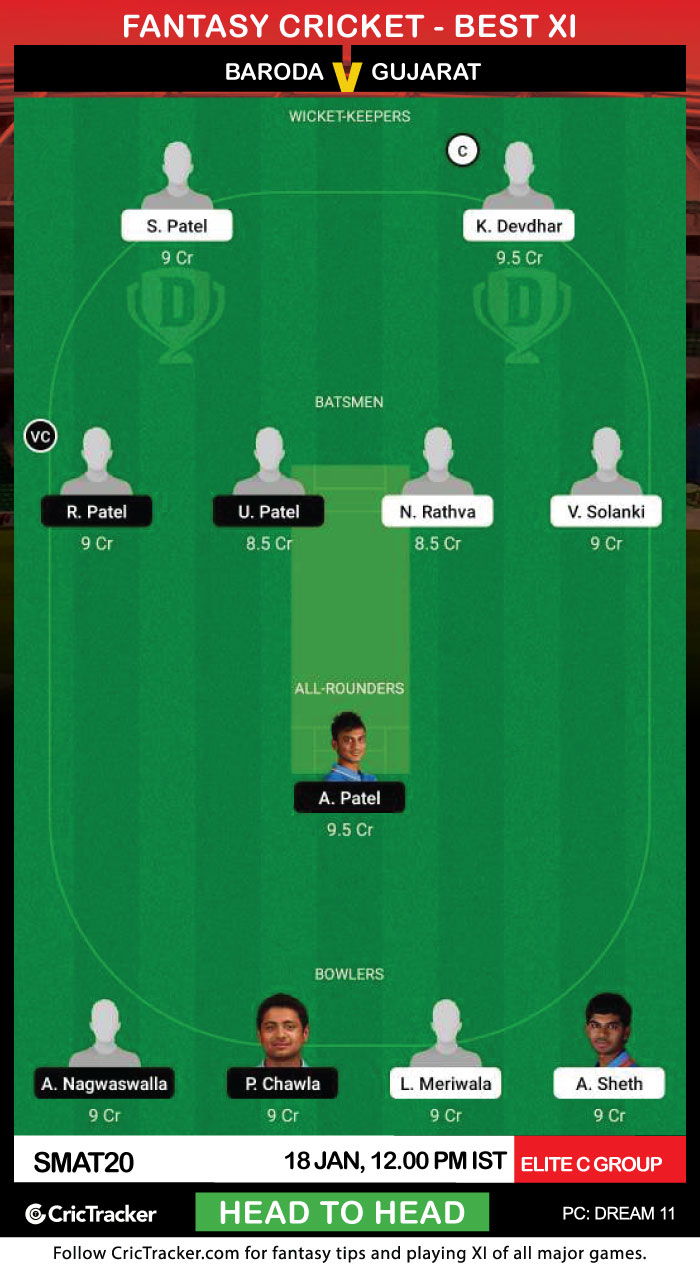 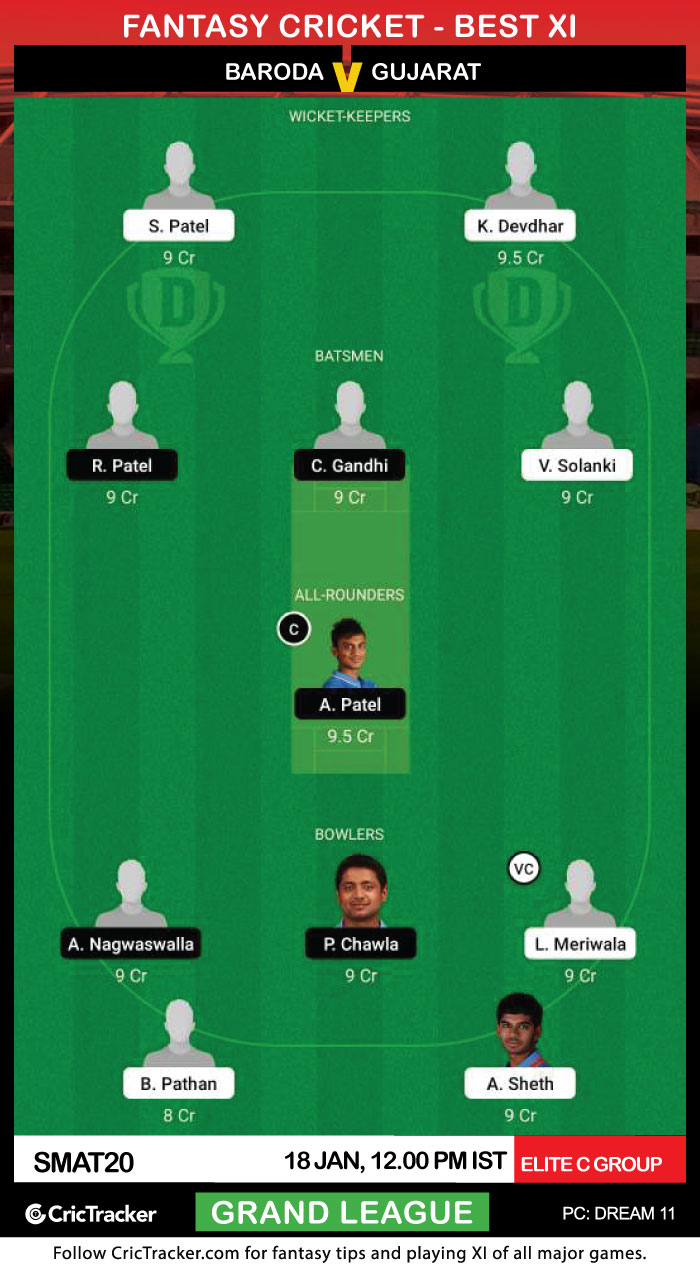 Kedar Devdhar remained unbeaten on 99 against Maharashtra in the previous game and taking his wicket is not so easy for the bowlers and he was dismissed only once in this tournament. He must be included in your Dream11 fantasy team and he is a suitable choice to lead the side.

Gujarat are expected to win this match.